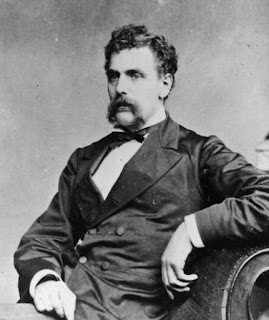 A friend of mine sent me information on the grave of Dr. Henry Slade, but I couldn't quite recall who he was. I thought he had something to do with 'spiritualism' but was not totally certain so the research began. His name shows up in magic periodicals and even magic books. So who was Dr. Henry Slade?

He was born in Johnson Creek New York in 1836 and at an early age showed signs of having some sort of psychic ability. The claim was he had some sort of telekinetic power and could cause objects to move and even levitate. Let's stop right there for a moment and get some historical perspective.

In 1848, two sisters, Margaret and Katie Fox of Hydesville NY began to produce spiritualistic manifestations in the way of rapping sounds. This unusual phenomenon had never occurred before and when the news got out the world of so-called spirit communication took off. By 1954, two brothers, Ira and William Davenport were presenting something they called 'The Spirit Cabinet' in which manifestations also took place. The brothers were from Buffalo NY. And guess what town sits right in the middle between Buffalo and Hydesville............Johnson Creek.

Henry Slade would have been 12 when the Fox Sisters started their 'spiritualistic work'. As I mentioned before, as a boy Henry showed 'signs' of some sort of unusual power. Quite interestingly, the two young Davenport boys also showed 'signs' of unusual powers at a young age, all of this right after the word of the Fox Sisters hit the newspapers. For the record, people who could create these manifestations were referred to as  'Spirit Mediums'.

Slade moved to Michigan when he was 20. His title of 'Dr' apparently was not a medical doctor but rather a 'spiritual doctor'. His signature spiritualist manifestation was called 'Slate Writing'. At the time a very common item was a small square or rectangular piece of chalkboard or blackboard that was used by school children, these were called slates. Dr. Slade would show the several slates to have no writing upon them and during the course of his seances, writing would appear. This writing, he claimed, were messages from the dead. And to make his 'slate writing' even more exciting, the words were often written in different languages.

The spiritualist community recognizes that Dr. Henry Slade inventing or discovering slate writing. He certainly gets credit for it's popularity. If you're wondering how this fits into magic history, well let me explain that the Fox Sisters and the Davenport Brothers all later revealed that what they were doing was fake. In other words, they used what we would call 'magical methods' to create their effects. Magicians of the time knew this and that's why many of them included 'fake spirit effects' in their shows. Others, like Harry Kellar actually exposed the methods used by fake spirit mediums in their performances.

Slade apparently made millions of dollars over the course of his career by presenting seances and slate writing exhibitions. He traveled to Europe and performed before many of the royal families. At the height of his career it was near impossible to get a sitting with Dr. Slade. Even with the exposures in the press and by magicians like Kellar and by scientific investigators, his popularity continued.

That popularity stopped when he was beaten and robbed one evening in NY. He lost $10,000 worth of money and diamonds, likely everything he had. Ten Thousand dollars in the late 19th Century would be about $250,000 today, he could have lived on that the rest of his life. But now the money was gone and on top of that he developed some sort of paralysis after his injuries. He continued to give sittings but now at the discount price of .50 cents. His frail body, lack of money and constant exposure of mediums in the press and in theatres brought his career to an end. He would up in a Sanatorium in Detroit. And died on September 9th, 1905 and was buried in a paupers grave in Battle Creek Michigan.

But the story doesn't quite end there. A number of famous spiritualists of the time found out about Slade being buried in Battle Creek and began to take up a collection to have his grave moved to Albion Michigan. It was discovered that Slade owned a plot in the Riverside Cemetery there. They did get his grave moved and now he rests beneath a very large monumental tombstone with the following inscription on it "Henry Slade, renowned throughout the world as the first spiritualist medium for the independent slate writing. Retired to spirit life September 8,1905 after an earthly visit of 69 years, 5 months and 22 days. With toil now finished, with soul set free, he now enters eternity."

So was Slade the genuine spirit medium that he claimed or was he like the Davenport Brothers, the Fox Sisters, Anna Eva Fay and others of the time, a fake? Well, he had been exposed a number of times. The most damning exposure came from Remigius Weiss who caught Slade in the act and forced him to sign a document stating that his manifestations were all done through trickery. Weiss later gave the document to Harry Houdini to be used in his book A Magician Among the Spirits.