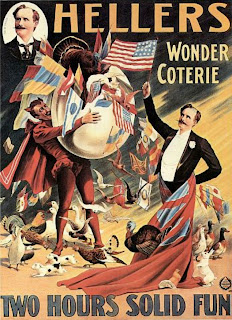 Imagine my surprise to discover a performer who claimed to be the nephew of Robert Heller. I found  him quite by accident. I was looking for posters belonging to Robert Heller and came across the one to the left thinking it was an unusual Robert Heller poster. But the picture didn't quite look like Robert and upon closer examination, I saw the name Geo W. Heller in the upper left hand corner. Who was this guy?

His name was George Waldo Heller, not be be confused with George Washington Heller, who was one of the early members of the S.A.M. and served as Vice President under Houdini. No, George Waldo Heller was very different indeed and is a bit of an enigma. He was apparently born in New York in 1860 and claimed to be the nephew of Robert Heller. Is this possible? Well, Robert Heller had two siblings, Angelo C. Palmer and a sister Fannie Palmer. According to ship records, when Robert Heller came to America the first time in 1852, be brought along a brother 'Ernest Heller' who likely was actually his brother Angelo. So perhaps George Waldo Heller was the son of Angelo/Ernest. Or it could be that there is no relation and he made it up for publicity reasons. It's impossible to tell.

One thing I do know is George left the U.S. to go to Australia in 1889 as part of Hiscock's Pavilion Company. He stayed in Australia and continued to perform until 1927. Heller helped Will Alma get his start. And when Heller had his own touring company he hired Harry Cameron, known as The Great Carmo to be one of "Heller's Entertainers". 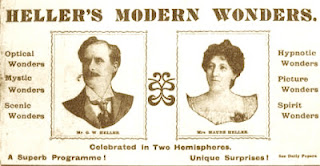 But it's Will Alma who gives us some insight into who George Heller was. Alma say's that Heller would go overseas to do business with Conradi and Willmann, the magic dealers. I also know that he had Stanyon build apparatus for him because I found records of this in Stanyon's Magic Magazine. His act consisted of illusions and small apparatus routines. The illusions included 'The Bridal Chamber', 'Gone', 'Cannon and Boxes', and 'Black Art.' He also presented a Second Sight act and a Spirit Cabinet, both routines featured by Robert Heller. Among his smaller prop routines he used Stanyon's Billiard Ball Pedestal, Confetti Doves & Flowers, The Drum That Cannot be Beaten, And a host of Telescoping Flagstaffs which can be seen in the poster at the top of the page.

Alma mentions that George Heller toured India as well as Australia and I was able to find a record of Heller in New Zealand in 1909 also, where his entertainment was described as first class. During a tour of North Queensland, floods ravaged the area and the Heller company was forced to travel by boat. In 1927, Will Alma formed a partnership with Heller called "Alma-Heller's Wonders," but they only presented three shows. George Heller became ill and the tour was cancelled. He died of cancer 1932 and was survived by his wife Maudeena. They apparently had no children.

Heller had a number of very beautiful full color posters, but his appearances within magic literature are quite small. In fact, if it were not for Will Alma, we would know precious little about George Waldo Heller.

Of the various magic sources that mention George Heller I did find some facts to be questionable. A couple sources say that Heller in his later days became a businessman. But I can find no record of what business he went into. He did provide touring entertainment and hired other magicians as well, so he very well may have gone into producing or acting as an agent. His final tour, which lasted three shows, he only showed movies with an Edison projector. So it's also possible the 'business' that is referred to was showing movies rather than performing. Also, several sources say that Heller performed in 1930 and 1931, but according the Will Alma, Heller never recovered from his ailment in 1927.

I'd like to add one more thing about the possibility that he was related to Angelo Palmer, the brother of Robert Heller. I cannot say for sure if this is true, however, I did find that Angelo lived and died in Australia. He did not however have anything to do with the magic business, Angelo was a lawyer. The one jarring thing is that Angelo went to Australia in 1853. So he likely only stayed in the US for a year before coming to Australia. If he traveled back and forth, I have yet to find the record. He did return to England when his father died, but eventually went back to Australia. Angelo C. Palmer died August 10th, 1912 at the age of 80. It is always possible that George Waldo Heller was actually born in Australia  and later traveled to NY, rather than being born in NY. There are a lot of questions and sadly, not a lot of answers.

UPDATE
Well, George Waldo Heller was NOT related to Robert Heller. It took me a while to find the proof, but I found it. Angelo Palmer who was Robert Heller's real brother denied that George was related to the family. And another performer who had worked with George prior to his name change gave the REAL NAME as Robert Wezner. Thanks to an issue of MUM from 1923 the mystery was solved!
Posted by Carnegie