One Day Till -The Magic Detective Show 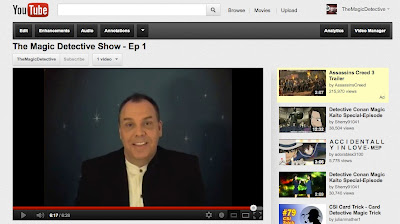 So after months of shoots and reshoots and restarts, the first episode is in the can, as they say. Between camera problems and just simply getting the time to shoot the show, it's been a challenge. I had expected to have this done MONTHS ago (like in January) but it never happened. But now I'm glad to say that the first and actually second episodes of the show are done.

The Magic Detective Show is a 5 minute look into the amazing world of theatrical magic history. We'll cover stories like the life, death and mysteries of Houdini, the first great American Magician Harry Kellar, we'll go in search of props and artifacts that belonged to great magicians and we'll visit with magic historians and collectors and much more.

The first episode of the Magic Detective You Tube Show will debut tomorrow, Friday Oct 5th at NOON Eastern Standard Time. It features an exciting escape from the 1970s gone bad!