Some Treats from Genii Magazine 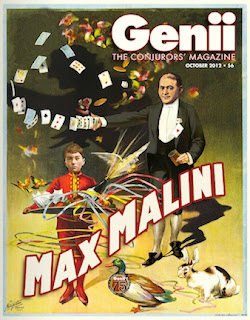 The October Issue of Genii Magazine is very exciting. Richard Kaufman has done a fantastic job with Genii since he took it over and this issue is another fantastic one for the magic history fan. Let's begin with the cover. The moment I saw the cover I realized it was actually taken from a Herrmann the Great poster. But reading further in the magazine I found that the cover was recreated by Mrs. Kaufman. In fact, Richard shows the two posters side by side but it's in black and white in the printed version (color in the digital edition).

The article on Max Malini is by David Ben and it is a MUST READ! There are tons of photos that I've never seen before and the article is filled with facts and trivia that you'll just love.

One thing you don't want to miss when reading Genii is the monthly column by John Gaughan called "The Chamber of Secrets". Every month there is some rare treasure from John's collection. It's usually the first thing I read when the magazine comes. The second thing I read is Jim Steinmeyer's column and then I look at the rest of the magazine.

Now, if you are a subscriber to the magazine, and if you aren't you should be, there is another magic history treat that you'll find in Richard's column called GENII SPEAKS. If you look at the top of page 11 you'll see a box that says 'Ray Goulet's Mini Museum'. Click the box and watch the video of Richard taking a tour of Ray's Mini Museum. I was there back in April, so I know how great it is, but there are even things in the video that I missed on my visit. And for the Houdini buffs, watch closely because there are a number of Houdini items you might not have seen before.

Finally, if you haven't already done so, please check out the site for the Genii Convention! Sadly, I'm going to miss it because I've got shows during that time. But rest assured, Richard his pulling out all the stops to have one earth shattering convention!
Posted by Carnegie