The Upside Down x 2 or More- Reposted

Today, September 21, 2012 marks the 100th Anniversary of Houdini's most famous escape, The Water Torture Cell. The article below was originally posted to my blog on Jan 2, 2011 and I'm reposting it now for those that missed it. My take on this is that there were more than 2 Water Torture Cells.

I would encourage you also to go visit John Cox's fantabulous website because he has a fact filled article on the history of the Water Torture Cell right up till today, www.WildAboutHoudini.com

I'm also researching a new lead for more information on this topic, so perhaps down the road I'll have some new information to share.

ORIGINAL ARTICLE
The USD or The Water Torture Cell or Houdini's Original Invention, whatever you call it, this is one of the most unique escape illusions in all of magic. It's also one of the most copied since the time of Houdini. Many performers have built their careers with this effect.

In the Patrick Culliton book 'Houdini-The Key' he mentions that there were two Water Torture Cells. This was something I had never known. But imagine my surprise when I heard recently that there were as many as four.  The person I heard this from said he sold the cell in the 1980s and so far the only thing I've turned up has been a fabricated mock-up and not an original cell. Being able to turn up proof of more than two Houdini cells has not worked out so well.

However, let's get back to the two cells that Pat mentioned. I think there is photographic proof of  two cells and if you look carefully in the following photos I'll point out why I think we are looking at two different Water Torture Cells. 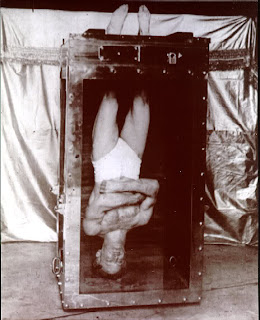 This image is a classic. Houdini hanging in the  UP-SIDE-DOWN Water Torture Cell or USD, as he called it. Notice the stocks. Patrick Culliton points out in his book that the yale lock in the front of the stock was added for the photo. However, I don't think so. These are different foot stocks altogether. They are missing handles, they are missing the metal trim on the sides and they are even missing the four corner circles that were used to hook cables to raise the stocks and Houdini in the air.

Now look at the frame around the glass, specifically the rivets along the top. There are seven rivets and the two on the far right and far left are closer together. In every photo of the USD there are seven rivets along the top and bottom of the front framework. However, most of the the other photos of the USD the rivets are equally spaced along the top and bottom. But not here. Also, take note of the width of this USD. It appears wider than those in other photos. I think this is because originally Houdini had a cage placed in the USD and there needed to be a little extra room to move around. Take a good look at the next photo. You'll see the cage inside, I believe this is the same cell as in the first photo. But notice the difference in foot stocks in this photo as compared to the photo above. This cell is the same as the one in the above photo, the distance between the rivets helps to identify it as the same cell (look at the lower rivets as the upper ones are hardly visible in the photo) 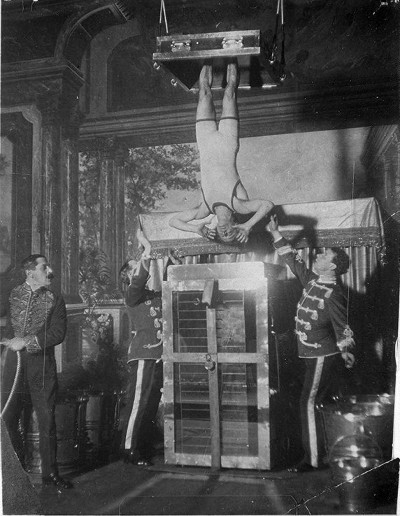 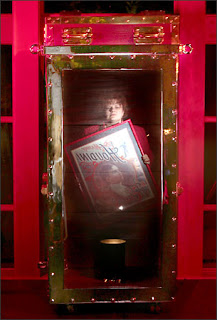 Now check out this photo. I believe this photo was taken after the clean-up that John Gaughn did to the cell but prior to it's destruction in the fire of the Niagara Falls Museum. Notice the evenly spaced rivets along the top of the frame. Also notice that the glass in this photo is much narrower than the photos above. The glass is as wide as the cage in the upper photos. But in the cage photo the glass extends beyond the edges of the cage several inches. This cell to the right is the one that went into the Houdini museum in Niagara Falls and was later destroyed in the fire. The remnants of this USD were used to build the recreated cell that sits in David Copperfield's museum.

To me it's pretty strong photographic proof of two different cells, but trust me you've really got to stare at these things to see the differences. The two cell photos at the top are of Cell #1, the color cell photo is Cell#2.

Oh, if you are wondering what happened to the cages that went inside the Houdini USD, according to Sidney Radner (via John Cox's Site WildAboutHarry.com) they were lost while in Henry Mueller's possession.

Patrick Culliton says that the second cell deteriorated in the backyard of Bess's sisters house. Though I honestly think the cell that deteriorated  was probably 'the first/wider/original'. Sid Radner received a later version of the cell. We know that Hardeen was considering rebuilding the second cell to train Sid but that cell would have to have been slightly larger to accomodate Hardeen. There is a famous photo of Hardeen and Sidney Radner standing next to the USD and they both dwarf this small cell.

But my mind does keep going back to the idea that there might have been more than two cells. I've certainly seen photos of at least three Houdini milk cans. So maybe there is a third Water Torture Cell out there somewhere. The next question is, what on earth does someone do with one of these things if it isn't being used or on display? I know Steve Baker's Water Torture Cell is gone. Who has it? No idea. It too was unique enough that if someone else performed with it it could be identified. Other people have performed the USD over the years with their own cells, are there just dozens of these things sitting in storage units all over the country???


The supposed third Water Torture Cell I was told about was sold to a museum in Nashville and later moved to Gatlinburg TN and still sits on display. However, the only USD I could turn up in Gatlinburg is this one at the Ripleys/Guinness Museum, and it's clearly not an original. (see side photo) Take a moment and read what is printed on the card that is stuck on the upper part of the cell. The last paragraph says "Although the exact history of this water torture cell is unknown, it was built in the early 1900s and is rumored to have been used by Houdini himself."

This WTC is even smaller in height than the others. The hardware on it is clearly modern. IF for some reason it was real, only the lower portion could be as the stocks are also very obviously made of modern plywood. I want to thank my friend Terry Evanswood for his help in searching this out and for taking the pictures. 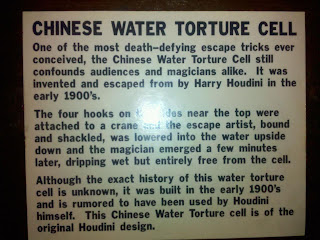 Still, I'm holding out hope that a third one shows up someday as it would be almost like the holy grail of magic props.

If anyone knows the location of ANY Water Torture cell, original or otherwise, please let me know. If there is a third Houdini cell out there I'd love to find it. I'd also like to find what happened to Steve Baker's WTC. His cell was nearly 7ft tall when the stocks were put on. It was massive compared to Houdini's and I know it's been out of his possession since the early 1990s. And where is Doug Henning's WTC today? I know Brett Daniel's owned it for a time but I don't think he has it any more.


Any leads, please email me at carnegiemagic@me.com

Now if you want to read MORE about Houdini's Water Torture Cell, please read this blog about the 'Two Torture Cells' which is different than what I covered.  visit http://www.wildabouthoudini.com/2007/02/mystery-of-two-torture-cells.html
I have a theory on this too that I may share eventually.
Posted by Carnegie