A Visit to the Mini Museum of Magic 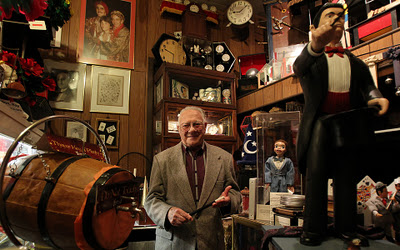 While in the Boston area, Denise and I stopped by Ray Goulet's Magic Art Studio and the Mini Museum of Magic in Watertown. Ray was a very close friend of Cesareo and in fact, Cesareo had suggested I make this visit on one of my trips. So this time out, we made sure to stop.

I must say it was well worth the visit for many reasons. First off, we spent a few minutes in the actual magic shop which was fun. Then a fellow came in who said he was going to give us a tour. I kind of recognized him but couldn't quite figure out who it was. He introduced himself and gave me his card and as I looked at it for a minute I realized, "WOW, I know who you are!". The fellow giving us the tour was none other than Houdini's Great Nephew John C. Hinson. As you might imagine, the talk moved from general magic history to HOUDINI. My first question right out of the gate was in regards to the WTC and how many there were....and my suspicions were confirmed. It was really fun hearing his stories and talking about Houdini. We spent a little time looking over the collection in this room. There was a lot of stuff, some cool posters. tons of apparatus, pictures of Le Grand David and even a couple automatons. John is a really nice guy and it was fun meeting with him and talking to him.

I'm not sure how long we were in there talking to be honest because we all lost track of time. Then we went into the theatre area where Ray and his wife Ann were along with several other magicians. Among that group was a fellow I also recognized Alan Wassilak the illustrator and cartoonist and magician! I had seen his cartoons in MUM for years and this was the first time meeting him. He turned out to be a super nice fellow and we even saw him the following day at the LeGrand David Show! Great guy!

We spent some time talking to Ann and Ray and everyone. I noticed on the wall a LeGrand David poster I had never seen before. Apparently it was one of the very early ones and was never made into prints. It was hand painted by Rick Heath and it's simply stunning. Also on the wall, suspended by chains was a 500 lbs sculpture of the LeGrand David troupe which was made by David Bull's father. Three of these giant sculptures were cast and Ray has one, there is one on display at the Cabot and then a third is at the American Museum of Magic in Marshall Mich.

Ray decided to take us on a tour of his Mini Museum Annex, and what a surprise we were in for! There is so much stuff in there it boggles the mind. Hanging framed on the wall is a Houdini Buried Alive Poster. There is also a rather large display window with numerous Handcuffs, a costume worn by Bess Houdini, a stock certificate of Houdini's and a punch bowl trophy that was given to Houdini by his assistants. There was also a display with pieces of the original Water Torture Cell.

Among the pieces which belonged to famous magicians, Ray had; Harry Kellar's Die Box, a cloth used in the decapitation trick performed by Alexander Herrmann, A flower botania owned by Harry Blackstone Sr., and a costume worn by none other than Cesareo Pelaez. The wonderful thing about the costume was that it was on a mannequin that looked just like Cesareo. Well it turns out that this amazing piece was also created by hand by Rick Heath, the resident artist at LeGrand David. I think this was our favorite piece in all the collection!

Ray has a video called "Ray Goulet's Mini Museum of Magic" which is available from the shop. It's not very long but it does give a wonderful overview of his collection. By the way, Ray pointed out to us he has never purchased entire collections in his entire time of collecting. Instead, he purchased each item piece by piece and amassed it all over a period of 35 years. It was a real treat to meet Ray and his wife Ann, they are an adorable couple and super nice people! 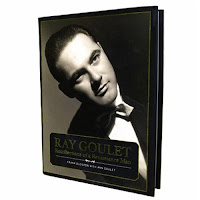 If you're interested in finding out more about Ray, I suggest you pick up the new book Ray Goulet Recollections of a Renaissance Man by Frank Dudgeon and Ann Goulet available through MagicArtStudio.com

If you do contact the shop, also ask about the DVD on his Mini Magic Museum as well!
Posted by Carnegie