LGD: Marco The Magi Lives On 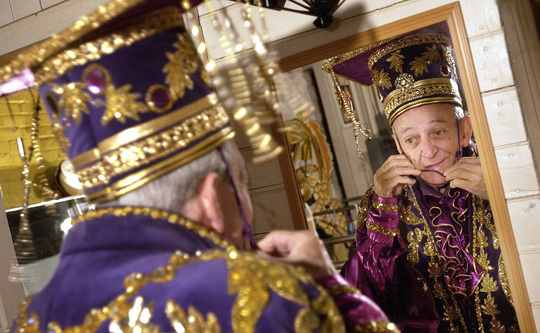 I would like to finish this Tribute with some thoughts on my friend Cesareo. There is no question he was a genius, a visionary, and a much loved person. He will be missed and I hope his status continues to build and build over the years. Cesareo was not a Houdini in the traditional sense. But in many ways he was very much like Houdini.

Both Cesareo and Houdini were immigrants who made a mark in this world that few could ever hope to duplicate. Both of them had a fiery passion for what they did. Both were innovative and creative. Both were Presidents of the Society of American Magicians. In fact, I'm sure if I gave it enough thought I could come up with a huge list of how they were similar.

But honestly, they were also very different. Cesareo was unique and though influenced by folks like David Bamberg and Chang and others, he was his own person. Even in his educational life he was different. He was an assistant to Abraham Maslow, but even Maslow couldn't communicate and connect with students the way Cesareo could. He was one of a kind and went on to have an amazing impact in the lives of his students, friends and everyone who came in contact with him.

I mentioned in an earlier blog article that I can still hear Cesareo in my head. It's true. I remember the conversations we had while driving back from the airport and sitting in the back of the theatre chatting. I recall vividly the very first conversation we had in the second floor of the Cabot. Quite an inspiring time to say the least. I remember him telling me 'You are doing it wrong' when I told him about the Festival of Magic Show that my friend Ralph and I were doing. Cesareo then told me what we should be doing, and we tried it and it worked! He told me to bring a video with me the next time I visited and he would discuss it with me while we watched. Unfortunately, he had a stroke only a week or so after that visit and he would be spending many months recovering and I never got to share my video with him or hear his thoughts.

I certainly didn't get anywhere near the time with him that others did. But I understood him and what he was about. So those lessons and conversations will be repeating in my mind for a long time. The suggestions he had for me will also continue to inspire and push me. And though he may be gone in the physical form, I know that he'll continue to teach and instruct through the writings he's left behind and those special friends who will carry on his message, and now I find myself among those special friends carrying on as well.

I just found out there is a new edition to the excellent book that Avrom Surath wrote called "Wonderful Suprises". It is a biography of Cesareo Peleaz by one of his closest friends. I read the first edition and it was great. But this new edition has some extra material.  On the back of the book is a quote from Cesareo which I will not give out, but I can tell you, for me they will be words to live by. You'll need to get the book to know what it says and you can probably get the book by contacting the Cabot St. Cinema Theatre at www.cabotcinemamovies.com

I'd like to leave you with this poem which was a favorite of Cesareo's and describes him perfectly and in a way, he leaves us with yet another lesson.


"The Country Teacher"
Even though you do not get
to see the fruit of your labors
Sow, always sow
life is to sow
is to sow
is to grow,
is to love.
Posted by Carnegie