The Other Houdini Grave

For many of my fellow magic & Houdini fans, our initial exposure to the are was through a movie by actor Tony Curtis called simply, HOUDINI. Though, the actual Harry Houdini died back in 1926, the loss of Mr. Curtis in 2010 was truly like loosing Houdini all over again.

Tony's real name was Bernard Schwartz and he was born on June 3, 1925. His parents were from Hungary and I can't help but wonder how interesting it would have been if the real Houdini had bumped into or even known the Schwartz family at some point. 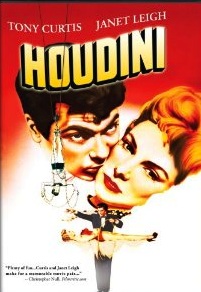 Tony got into acting after a stint in the Navy during WWII. He made many classic movies, among them: Some Like It Hot with Jack Lemmon and Marilyn Monroe, Spartacus with Kirk Douglas, and of course my favorite HOUDINI which he made in 1953 with his wife Janet Leigh.

Tony retained an interest in magic after making the fictional movie on Houdini's life. He appeared on a number of TV Magic Specials, among them NBC's Stars of Magic in which he performed a Costume Trunk Illusion, HBO World's Greatest Escape Artist in which he was the host,  and I believe he also did some hosting work with Dean Gunnarson during an underwater escape performed by Gunnarson. About a year or so before he passed away, Tony did an interview with Dodd Vickers of The Magic Newswire which can be heard here.

This Houdini movie was one of the inspirations for my career as a magician, and Tony also was instrumental in another area of my life. Besides acting, he was an artist, a painter. Seeing some of his work, along with the works of Red Skelton and Anthony Quinn in an art gallery years ago, rekindled my interest in art and specifically painting. I figured if the famous could have a career in entertainment and also paint, then so could I! Some of his artwork can be found on his website, but a search on the internet will reveal quite a broad look at his many paintings. http://www.tonycurtis.com/Online_Art_Gallery.html 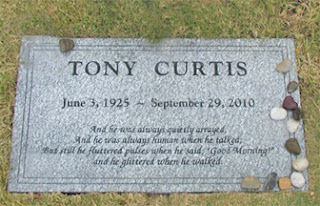 If you cannot be there in person and wish to show your respect, you are welcome to mail a small stone. Your stone will be personally placed on Tony's marker by his wife, Jill. In the Jewish Faith, stones are placed to show that someone visited and that their love is as enduring as a rock.

Stones can be mailed to: