Tracking the Body of Houdini

With the recent controversy and chatter over the History Channels DECODED Episode regarding HOW Houdini Died, I thought I'd go in a slightly different direction and follow his body after his passing. We know Houdini died on October 31, 1926 in Detroit Michigan. What follows is a description of the events following his death right up until his burial. There are photos of the various places his body stopped along the way and the article concludes with the short 20 second recording of the Houdini Funeral.

DETROIT Oct 31, 1926
He died at 1:26 p.m. in Room 401 at Grace Hospital in Detroit. From there his body would have gone to the hospital morgue and then to Wm. R. Hamilton's Funeral Home on 3957 Cass St. The photo here shows the white house which was the original building for the funeral home and is where Houdini's body would have been. There is a larger brick building connected to it on the left but this was not completed until the 1930s. This is where Houdini was embalmed by John Fraser, one of the employees at the funeral home.

While this was happening the Houdini Show and all it's props and equipment were being crated and shipped back to NY. However, oddly, one piece did not make the trip. It was a bronze coffin with a glass lid which Houdini had intended to use for a buried alive stunt during the 1926-27 Tour. After the embalming at Wm.R. Hamilton's Funeral Home his body was put into this coffin and then into the crate for the coffin. Houdini's body now fully crated was taken by truck to the Michigan Central Station. An extra Pullman Car had to be added to the train for Houdini's casket and for his family to travel back home. 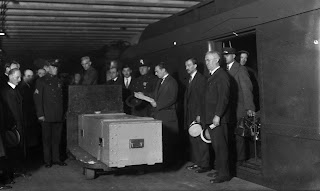 Newspaper accounts of the time report the body leaving Detroit on the 1st to arrive on the 2nd in the morning at Grand Central Station in NYC. In the photo (left), you can see the crate containing the casket with Houdini's body. One thing I never noticed before was the fellow standing on the far left hand side with his hat in his hand. That is Servais LeRoy, the illusionist and friend of Houdini. In fact, hundreds of people were at the station to see the casket arrive. Houdini had been the President of the Society of American Magicians as well as one of the most famous and beloved entertainers in the world, his death came as a shock to everyone.

Upon arrival at Grand Central Station, the casket was taken by Samuel Rothschild to his West End Funeral Chapel, 200 West 91st Street. The casket was to remain in state at the funeral parlor until November 4th. There had been talk of having the casket lie in state at the Hippodrome Theatre but this did not happen.
A letter Houdini had written several years before was discovered outlining the details of his funeral and they followed his instructions. Per Houdini's wishes the funeral would take place at the Elks Clubhouse Lodge No.1 in NYC. According to news reports, thousands of people came by to pay their respects at the funeral parlor.  By the way, the photo to the above/right shows the location of the West End Funeral Chapel, but today it is the Plaza Jewish Community Chapel. 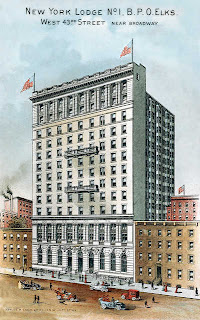 On the morning of November 4th, 1926, the casket made it's second to last stop, this time the Elks Clubhouse on West 43rd near Broadway. It took three cars to move all the flowers from the funeral parlor to the Elks Clubhouse. Houdini would have been proud as the room was packed  for  his funeral. Close to two thousand people showed up for the service. 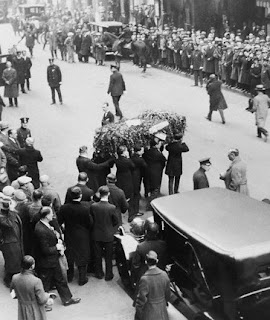 Finally at the cemetery, the two rabbis were present at the grave site as well as Houdini's family and widow Bess and one hundred+ mourners. Houdini made it clear in his final burial instructions that he was to be placed next to his mother. After the final words and prayers were given by the rabbis, the casket was lowered into the ground. According to the Silverman biography, Theo Weiss, Harry's brother tossed a flower onto the lowering casket and as if my magic a shower of flowers were tossed by the grieving graveside friends. This can be seen on the longer 1 minute plus footage of the Houdini Funeral, but I've only seen the shorter video (below). 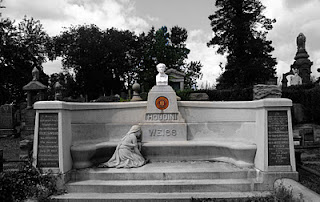 Below is a short 20 second video of footage from the Houdini Funeral. It's obviously second or third generation because of the poor quality.