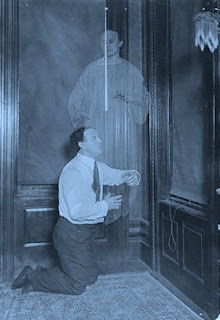 I posted this at exactly 1:26 p.m. on Halloween, October 31. It's 85 years since Houdini passed away.  He was famous in his day as an escape artist, magician, illusionist, movie star, scientific investigator, spirit debunker, author, President of the SAM and much more. But even with all these titles under his belt, he was missing one, legend.

His death and the years followed gave him that title. He has become such a legendary figure that often lay people don't realize that Houdini was a real person. There have been numerous movies about him, but usually they are highly fictionalized which is a shame because his real life story is so fantastic it doesn't really need beefing up.

Houdini was only 52 when he died, but by then he had already accomplished more than most people do in a life time. In his day he inspired people with his feats of escape and marvelous wonders, and 85 years later, he still serves as an inspiration. Though he may be gone physically, the Spirit of Houdini will live on forever!