The Discoverie of Witchcraft 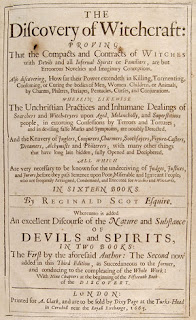 In 1584, Reginald Scot wrote and published a book exposing the world of witchcraft and along with it, some of the feats of jugglers. I've not read this book, nor do I own a copy. I do know that it's considered one of the earliest conjuring books in the English language, even though only about 20 pages are actually devoted to legerdemain or conjuring. Back in the 1500s, magicians were known as jugglers as their feats were attributed to skill, not the works of the devil. Over the years, the term juggler changed for those of us that do theatrical magic and we became; magicians, conjurers, illusionists and so on.

Original copies of The Discoverie of Witchcraft by Reginald Scot are rare. This book came out during the time of King James 1. An interesting historical note, King James wrote a book called 'Daemonologie' in 1597 in which he expressed his concerns over witchcraft and his opposition to it's practice. However, in just a few short years he came to the realization that the events attributed to witches were more illusion than reality. For example, the idea that witches fly around on brooms, well they never did and never will because it's just not possible. It's hogwash, nonsense and superstitious crap.  I can't help but wonder if he came across a copy of Scot's book which opened his eyes. So King James 1, the same man who commissioned the edition of the Bible known as the King James version, came to his senses about witchery, astrology and similar things.

The section of the book by Reginald Scot exposing the feats of jugglers was included to show people that these things were NOT, I repeat NOT real magic. NOT in the league with the devil and so on. Funny that in the 21st Century I would find myself in the position to have to emphasize this point. But alas, a client in my area cancelled a show because a member of their group insinuated that magic was evil. The only magic today that I know of that is evil is bad magic, or magic performed badly. Any other kind of magic, or magik, has nothing to do with what I do, theatrical magic.

I can firmly confess that I do not know any witches. I don't know any real wizards either. I do not cast spells, nor does anyone I know. In fact, I've spent hundreds of hours and years of my life learning a skill set that has not been anywhere near as easy as snapping my fingers and casting some spell. If it were only so simple. It takes hard work and dedication to make something look effortless and frankly, magical. No, instead, like a musician who goes from learning how to make sounds out of an instrument to then moving to making actual music, or a painter who throws colors on a canvas to eventually learning how to create beautiful pictures, it's the same for those of us in my profession. As Robert Houdin, the 19th Century French magician said, "We are actors playing the part of a magician". This then is the most stripped away definition I can think of. And like actors we entertain and hopefully make people laugh, create moments of wonder, and at times even move them emotionally with the things we do. Oh and we can even use magic as a teaching tool as in the case of my reading show or those of many of my friends who use magic to help educate people about; bullying, drugs, science, math, diversity and so on.

What does it say about our society today in the 21st century that there are people who think David Blaine and Cris Angel do REAL MAGIC or that magicians as a whole consort with demons and devils to create their wonders?  Rather than pointing the finger at the magicians who use the art for entertainment, why not open your eyes to the REAL deceptions around you brought about by politicians, advertising agencies, diet & weight loss pills and on and on it goes. The society during Reginald Scot's day had an excuse as they weren't well educated. Today, what excuse is there? Maybe, in the end, we just like to be deceived.
Posted by Carnegie

Email ThisBlogThis!Share to TwitterShare to FacebookShare to Pinterest
Labels: discoverie of witchcraft