The Man in the Bottle 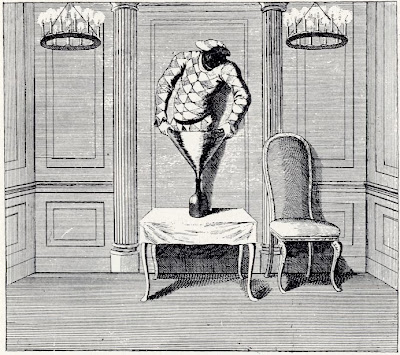 In 1749 a newspaper advertisement announced that on the night of January 16th, at the Theatre in the Haymarket an unnamed conjurer would appear at the theatre and would perform for the following feats:

On the evening of Jan 16th the theatre was sold out for the show. People inside waited for a quite a while for the show to start and had begun to get restless.  The theatre management came out and announced that if for some reason the performance did not go through, everyone would get their money back. The management was aware that at this point, the supposed conjurer had not arrived for his performance and they were understandably nervous.

A member of the audience yelled out, "For double the prices the conjuror will go into a pint size bottle!". It was at this point that the audience realized that they had been taken advantage of and began to tear the theatre apart. Draperies, chairs and furniture were thrown into the street and set ablaze.  Apparently the nights receipts were also stolen from the theatre as well so no one got their money back. Not the best night at the theatre.

The theatre were this took place still stands. Today it's called the Theatre Royal Haymarket and it is the third oldest theatre in London.

So it's wasn't a real magic trick nor was there a real conjurer involved. Instead what you have here is a life lesson that apparently people need to be reminded of again and again.

I live near Washington D.C. the Nations Capital.  There have been more hoaxes and lies started from this town than anywhere on the planet. In this day and age it's a good idea to remember the lesson of the Bottle Conjurer when it comes to politics, religion, advertising, fad diets and online dating. Remember what Barnum said, "There's a sucker born every minute". Don't be the sucker. There is your lesson for the day from the Magic Detective! :)