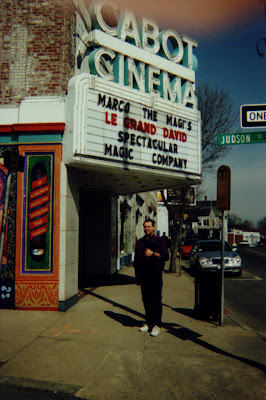 I hope you enjoyed the four part blog on Cesareo and the Le Grand David show. That was written 11 years ago. Since that time much has happened. With Cesareo's encouragement I had run and was elected as the MidAtlantic Regional Vice President of the Society of American Magicians. The plan was to take it all the way and eventually become President of the organization, as he had years before. While all that was happening, the events of 9-11 took place. A tragic event that has touched people across the globe.  I had just flown out of Boston visiting my friends in Beverly, a few months before 9-11, and the planes that hit the twin towers came from the Boston Airport. After that event I found that I was unable to fly. I just couldn't do it.

The plans to move forward with the S.A.M.  faded away sadly. The fear of flying also kept me from visiting my friends in Beverly for a while which I felt terrible about. Now, I have since gotten back on airplanes and flown, but it took a while believe me.

Many good things happened because of Cesareo's influence.  The creation of the Festival of Magic Show and then the Underground Magic Theatre. The Festival of Magic was a show that I started doing with my friend Ralph Metzler. We had both wanted to do bigger shows and we started by finding places that we could lease and put the show on. Initially we both did our separate acts but Cesareo suggested we perform together. So we did and I have to admit it was a little awkward and really fun at the same time. We even took our Festival of Magic routines to the White House Easter Egg Roll one year and again, what a blast we had. Well, I had fun, I'm not really sure it was something that Ralph was into, but he went along with it with smiles all the while.

As the Festival of Magic was happening, we also acquired a rehearsal space with offices. A movie theatre next to us that was closing down offered to give us as many theatre chairs as we wanted free of charge as long as we hauled them out. So we took 100. We didn't know at first what to do with them, but our friend Adam who we also shared the rehearsal space with, suggested we put in our own theatre. Low and behold the Underground Magic Theatre was born. We converted this rather gloomly cinder block lined warehouse into a theatre by painting the walls, covering them with vintage magic posters and artwork. Putting in the theatre chairs, making a curtain and installing lights. It was basically a small version of the Cabot St. Theatre in Beverly, a very small version. It was tremendous fun and all done on a pretty small budget. The theatre had it's first shows in 2002 and ran until the Summer of 2005.

By the way, the Festival of Magic Shows stopped when we created the theatre. The theatre ended when my friends Adam and Ralph moved away and I chose not to keep the theatre on my own. But I continued with other things that came out of my talks with Cesareo. For one, he encouraged me to write. I had not written much of anything before meeting him. But he saw something in my writings and suggested I continue it. So I began to look for outlets to write. These included a couple books, lecture notes and of course several blogs including this one. He was also a strong advocate of my artwork and I really started to excel after he bragged about it. I guess my appreciation of magic history also grew with my friendship with Cesareo. Granted I had always had a fondness for magic history, it really took off after spending time with Cesareo and the folks in Beverly. It's safe to say that without their influence, this blog and the others I did before it would never have existed.

While all this was happening, I took another trip up to see Cesareo and all my friends in Beverly. It was such a wonderful visit, my third since the original trip. I had a really enjoyable time and again learned much from Cesearo. I also got to know David Bull better and Rick Heath. The trip was very energizing for me and like all the trips before, filled me with hope and direction.

A short time after this a terrible thing happened, Cesareo had a stroke and it was bad. It was quite a shock to everyone in the LGD family. It took him quite a while to recover.  No one knew if Cesareo would recover but he told everyone that he would and he'd be back onstage performing.  He was true to his word and did return for a short period of time. His health though was never quite the same after the stroke.

I went to visit Cesareo in 2007 and he again appeared in the show. I think he was only doing it because I had come up and I got the distinct impression from a number of the women in the company that they were none too pleased about it. The show had changed a lot by this point. Cesareo's spots had been taken over by other members of the cast. His role the night we saw him was small and honestly, he did not have to be onstage on my behalf. I would have been just as happy to sit with him in the audience as have seen him onstage.

Let me go back in time a bit. Back when I first visited Cesareo he mentioned to me the idea of moving to Beverly and joining the company. He had made several 'suggestions' over the years like that.  I thought about it. I thought about it a lot. But I think probably I make a better leader than follower. I'm a little too much like Cesareo in that regard. I took every suggestion Cesareo ever made to heart and followed through on many of them. But I had ideas about the show, ideas on how to change it and modernize it without loosing it's historical vibe.  I should add, that there is nothing wrong with the show as it is. It's WONDERFUL and thousands of performances bare that out. But I tweak everything, including my own show, sometimes a turn to the left or right or exiting a second faster or slower can bring about big changes from the viewpoint of the audience. I probably never would have even thought about changes to such a grand production though if Cesareo hadn't once asked me, 'what can we do to make it better?'. At the time I had no ideas as I was caught up in the excitement of it all. But eventually my performer background took over and I had ideas. And as much as I was an adopted member of the Le Grand David family, I realized that I was an outsider really.  It would have been inappropriate of me to move up and start making suggestions when it wouldn't be my place.  I love these folks in Beverly and the last thing I'd want to do is offend any one of them.  And at the time that all this was happening, much was happening at home with the Underground Magic Theatre and growing amount of shows. So all these factors go into a decision and right or wrong, I made the decision not to go. 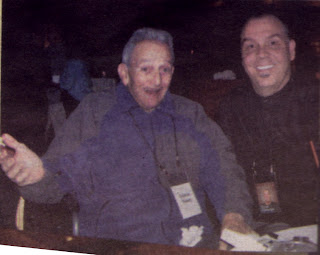 I last saw David and Cesareo and Avrom in Las Vegas at the last MAGIC LIVE. Cesareo still had that twinkle in his eye but he doesn't get around as well as before. At a magic convention, everyone wanted to spend time with Cesareo and I certainly understood that. If I had my choice, I would have rather spent the entire time with Cesareo, David and Avrom rather than hop from event to event at the convention. As it was, I only got to see them a few times, but I was so happy to see them.

I think of my friends in Beverly often. I miss them daily. I doubt they'll ever know how important they were to me and still are. I still hear Cesareo's lessons in my head. His influence will be with me forever. The real magic in each of the people who are part of Le Grand David is not in the two shows that they present. The real magic of that big family in Beverly Mass comes from their hearts and once you've been touched by them, you just can never be the same.

One thing I didn't mention in my original articles of 11 years ago was the fact that on my first trip to Beverly, I stay with Ann and Avrom Surath. They graciously opened their home to me and my girlfriend during our stay. They are just incredibly generous people. They are both members of the cast, and Avrom plays one of the clowns in the show. He is also a pianist and several times before, during and after the show, Avrom can be found playing piano. The music that comes from his hands is so beautiful. Ann is in the show as well, and I believe they are both original cast members that have been with the show since day one. Avrom has also written an incredible book about Cesareo and the show called "There Will Be Wonderful Surprises". It's available through Amazon.com, though in a very limited quantity. So if you want it, get it now.  http://www.amazon.com/gp/product/0940376105/sr=8-1/qid=1305434509/ref=olp_product_details?ie=UTF8&me=&qid=1305434509&sr=8-1&seller=
I could mention something about each person, because they all went out of their way to say hello and talk to me. I remember fondly the trip with David to pick up the animals. By the way, David Bull is one of the most skilled and talented magicians you could ever want to see. And then there is Mark, who is another incredible magician who works in the show and also does multiple jobs behind the scenes. OH and Rick Heath who is a man of so many talents I can't even share them all. Besides being a member of the company he also paints the fabulous posters that advertise the show. I met Mark and Rick and Avrom and Ann during my very first night in Beverly eleven years ago. And then there is Tom and Pam and Webster and Katie and Marian and Martha and Ellen and Perry and Kathleen and Johnny Lapo and Leslie and TJ and Igor and Blackey and I know I'm leaving out a couple people whose faces I see vividly in my mind but because it's late my memory is not functioning the best so the names are escaping me.

I'm feeling home sick right now for Beverly, the home I never lived in. I'm going to go now and watch a video that was given to me during my first visit. I'll be able to see all my friends again any second...

By the way,  if you like, please visit my other blog to read one more thing about LGD and to also see my LGD paintings.
http://artistofmystery.blogspot.com/2011/05/legrand-david-my-folks.html

To see the show or to find out MORE about Le Grand David go to their website www.legranddavid.com
Posted by Carnegie