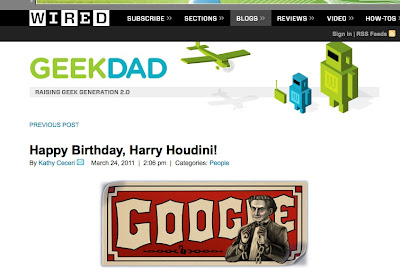 Even WIRED Magazine is getting into the celebration of Houdini's Birthday. Google of course deserves a big huge HIGH FIVE for putting up the Houdini/Google logo today and making people aware of the day.

I've got a feeling there will be more news to follow. To read the WIRED article go here:
http://www.wired.com/geekdad/2011/03/happy-birthday-harry-houdini/

Here is an article by a teacher giving links for Houdini sites:
http://mrsjacksonsclasswebsiteblog.blogspot.com/2009/03/harry-houdinis-birthday-march-24.html

Even MTV is in on the Houdini News
http://moviesblog.mtv.com/2011/03/24/harry-houdini-birthday-movie/

And one more just for fun
http://www.utexas.edu/opa/blogs/culturalcompass/2011/03/24/harry-houdini-slideshow-celebrates-137th-birthday/
Posted by Carnegie