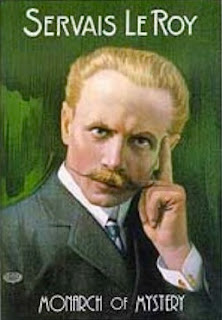 In my previous blog I mentioned how Harry Kellar came out of retirement for one show and rocked the Hippodrome theatre. That was a positive example of a retired performer coming back and successfully giving a great show. However on Feb 5, I shared with you a blog called 'When Heroes Fall' and it described a very tragic and unsuccessful return for Servais LeRoy. I also said that wasn't the end of the story nor was it the worst part.

Now for the later part of the story. That sad show that ended Servais LeRoy's performing career was in 1940. He never performed again. All of his props were in storage, some in different locations. One day LeRoy went to one of the locations where his props were stored, and with an ax, destroyed everything there. Later, the props that were stored in a garage in Keansburg NJ, were taken and put on the curb side in order to be picked up and hauled off by the trash men. I don't know if costumes survived, but my guess is probably not.

The Lions cage that was such an important part of his show rusted away outside the house. It reminded me of how Thurston's levitation rusted away in the front yard of his house, becoming an unrecognized pile of wire and metal. Here is a photo of the Lions illusion years before it rusted away.

LeRoy turned his back on his magic life after the terrible final performance in 1940. He did have the occasional magician who visited him. But it must have been difficult for him. LeRoy lived until 1953. He outlived Talma and most of his friends. Reading his last days reminded me of when Dai Vernon would talk about all his many friends being dead.

Today, there is precious little in regards to LeRoy's apparatus. Many of his posters survive thankfully. And his legacy lives on with the 'asrah' table design. His life ended in such a sad way. Our magic history is filled with these kinds of stories and it's important to remember them. It also serves as a reminder to us to cherish those among us that came before and celebrate the lives of those we are still fortunate to have with us today. It's a good idea to say thank you to those who contributed so much to the art. It's nice to know you are still appreciated. And it's hard to say thank you once they are gone.


Now do yourself a favor. Go read the entire life story of the great Servais LeRoy. His life ended roughly, but he had a tremendous career. It's covered beautifully in the Servais LeRoy Book by Mike Caveney and William Rausher, plus the photos are wonderful and poster reproductions are just inspiring. To purchase this fantastic book Just click the link.

I'm not 100% sure the book is available, so you may need to email Mike to be sure. If you can't get it there, try some of the magic dealers or ebay. It's worth the investment.
Posted by Carnegie