Who was William Fay?


His name was William Marion Fay, born in 1840. He was a resident of Buffalo, NY who had an early interest in magic. Various magic histories show his name as William Melville Fay, but his tombstone clearly has his middle name as Marion. He was not related at all to Anna Eva Fay though they share the same last name. I found a reference to the fact that William Fay was doing a 'Second Sight Act' similar to that of Robert Heller's, but I don't know when. My guess is it was prior to going to work for the Davenports.

In 1864 he was hired by the Davenport Brothers to be their Tour Manager as they sailed to England, replacing the Davenport's father. Fay would also be a back-up performer for William Henry Davenport at times when he was too ill to perform. Given that he was interested in 'magic' it's safe to say that the Davenport's taught their rope technique to William Fay. That alone should dispell any belief that the Davenport brothers were creating legitimate spirit manifestations(as if anyone still believes that to be so). 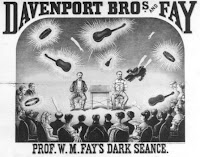 In 1869, a young man by the name of Harry Kellar joined the troupe. It appears that he took over the managing job that William Fay had. Fay was still with the company and surely filled in whenever he was needed. In 1873, Kellar had a falling out with William Henry Davenport and abruptly quit. But he didn't go alone, as William Fay left the employment of the Davenports and went with Harry Kellar.


FAY & KELLAR
The two performers joined forces in the Spring of 1873 and began to tour the United States. Calling themselves Fay & Kellar, probably because William Fay was older than Harry and it was a case of age before beauty. Harry Kellar would do the act that he learned while working with the Fakir of Ava and then the conclusion of the show would be a recreation of The Davenport Cabinet, or what is known today as The Spirit Cabinet. The act apparently was not an immediate success as lack of money left them occasionally stranded.

Their luck would change however. Kellar secured some dates for them in Cuba. At the Albisu Theatre in Havana it was said they made over $3000 during their first night on stage. Success continued for them on their tour of Cuba. From there the two went to Mexico and again met with great success. To cut down on their travel expenses they hit upon the novel idea of leaving the Spirit Cabinet behind in each city they played and simply had a new one built when they got to their next destination. Back in this time, the Spirit Cabinet was just that, a very large wooden cabinet. There was nothing faked or gimmicked about it so having the locals build a new one was easy.

From Mexico they sailed on to South America and toured all over the country. The tour of South America was successful with the exception of a couple weeks in December 1874. By July 1875, the South American tour was complete and Fay and Kellar got on board a steamship called the BOYNE and set sail for Portugal.

On August 18, 1875, the BOYNE hit ground near Ushant Island and sank in the Bay of Biscay. This Ushant Island is just off the coast of France. This area of the Bay of Biscay has claimed numerous ships over the years. The Boyne was not the first ship to go down and would not be the last. Fay and Kellar survived the shipwreck but they lost all of their belongings and show props and money.  This marks the end of the Fay & Kellar partnership. They both returned to England but headed their separate ways. Kellar was determined to rebuild his act. While Fay lucked out and rejoined the Davenport Brothers who had just arrived back in England.


BACK WITH THE DAVENPORTS
The Davenport Brothers were back in England at the same time that William Fay arrived in the country. He rejoined their company and traveled with them to Australia. In 1877, William Henry Davenport who had suffered from poor health for years, died in Sydney. His brother Ira Davenport returned to the United States and William Fay remained behind and settled down in Melbourne Australia. He married Eliza Lydia and together they had one son Franklin.

Whenever Harry Kellar was on tour in Australia he would make a point to visit his old friend and partner William Fay. One year he spent the Christmas holidays with the Fays.

In 1895, Ira Erastus Davenport had the brilliant idea of starting up the act again and he contacted William Fay in Australia to get his opinion. Fay decided to sail to America to join Ira Davenport.  Either the performances were below the standards of their youth, or just behind the times. Whatever the case, they threw in the towel after only three days. Ira retired to Mayville, NY. William Fay went back to Australia.

Fay died in Australia on July 16th, 1921 at the ripe old age of 81. He was buried in the Melbourne General Cemetery along with the rest of his family.

In the near future I will have a blog article on the Davenport Brothers and their Incredible Cabinet. But I thought you might enjoy learning a little bit about this lesser known part of the company who also worked with Harry Kellar.

If you'd like to learn a bit more about William Henry Davenport, one half of the Davenport Brothers, Kent Blackmore has written an incredible article on him. He has also graciously allowed me to use this grave photo to the left.
http://www.sydneymagic.net/history/davenport.html

The location of the grave at the Melbourne General Cemetery can be found  here: http://deadconjurers.blogspot.com/2011/02/grave-of-william-fay.html
Posted by Carnegie