Please keep in mind that all of these homes are private residences today. They were ONCE owned by famous magicians, but no longer. Enjoy them here, but don't go knocking on doors! 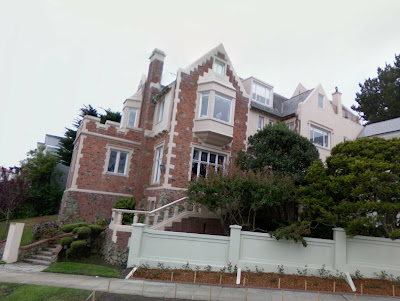 First up, Carter Manor. This was the home of illusionist Charles Carter. It's located in San Francisco and at one time overlooked San Fransisco Bay. There are lots of other homes in the area now. Though I don't know for sure if you can see the Bay or the Ocean from the house itself, possibly you still can. The property was purchased in 1929 and the house was built the following year. Not long after, Carter tried to sell it for $90,000, but had no takers. According to the Carter Book by Mike Caveney, the house contained: "A Magic Theatre w 150 seats, vanishing bars, moving pictures (on the wall), hidden chambers, closets, passages, and the dinning room table came up from the floor below via a trap door". What it's like now on the inside is anyone's guess. This might be the most amazing house owned by a magician. 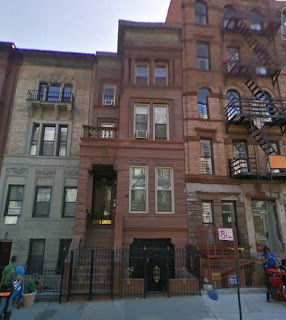 Houdini purchased this home at 278 W 113St in Harlem, NY. Houdini purchased this house for $25,000.00. He put put it in his brother Leopold's name, at least while they were still on good terms. His mother lived there, as did other family members. The basement housed a workshop for building props. His office/library was here and it would grow so large it practically took over the house. There is a fantastic write up about a visit to the house at John Cox's site WildAboutHoudini.com.

This was not Houdini's only property. He had at least one place in California. There were also places he lived prior to 278 in NYC. He also had a 7 acre farm property in Stamford CT where he would spend summers. 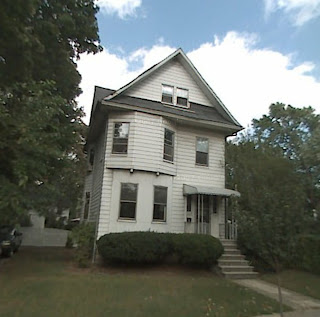 Harry Kellar, Dean of Magicians purchased this modest home in Yonkers NY after retiring from the stage in 1908. He would eventually retire to Los Angeles California and had two different homes there. The KELLARS WONDERS book by Mike Caveney and Bill Miesel contain photos of both of Kellar's California homes. They were located at 698 Wilshire Place Los Angeles, and 460 S. Ardmore Los Angeles. Neither of the California homes are standing today. From the S. Ardmore address there is a clear view of the 'Hollywood' sign. However, Harry Kellar never would have seen it, because he died in 1922, and the sign was not erected until 1923. Incidentally, the original sign read 'Hollywoodland'.
The ACTUAL HOUSE of MYSTERY 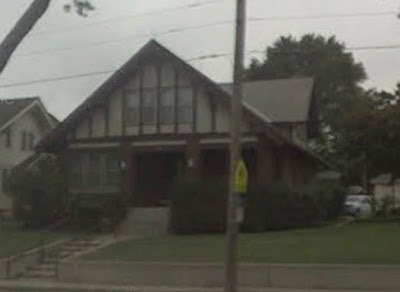 This rather unassuming house was built in 1914 by David P. Abbott. He ran 'The Peoples Home Loan' Company in Omaha Nebraska and he was an avid amateur magician. When it came time for him to build his home, he turned it into a giant piece of magical apparatus. The house itself was totally 'tricked out'. There were secret passages and compartments, special wiring allowed for eavesdropping during mental effects. The parlor was set up to accommodate both up close and stage like performances. He performed the Floating Ball in his living room for special guests!Oh and the guests he had over included; Houdini, Theodore Bamberg (Okito), Harry Kellar, Ching Ling Foo and others. In fact, Harry Kellar used some ideas from the Abbott house for his second house in Los Angeles.

Abbott was a prolific inventor of effects. He created a version of the Floating Ball that was so amazing, both OKITO and Howard Thurston requested that Abbott teach it to them personally. It is really by sheer luck, his book "The Magic Science of David P. Abbott" survived and was finally published. Abbott died before it's publication and the manuscript was apparently in a pile of odds and ends to be thrown into a bonfire by later residents of the house. Thankfully, someone took them from the pile to be burnt and the book along with countless photos was saved!

Miraclefactory.net put out a two volume set of his material aptly called "The House of Mystery". Teller of Penn and Teller was one of the editors of the book, the other was Todd Karr. Both of them have a deep interest in David Abbott's work. IF you want to read some absolutely breathtaking history as well as learn some drop dead awesome magic find a set of "The House of Mystery" books. They are sold out so you can't get them through Miraclefactory.net. But check ebay and other places and you might get lucky.

#100 This was my one hundredth blog entry and I wanted to give my readers something different. I'm tracking down other homes by famous magicians. Sadly, many homes are gone. But if you happen to have photos of any of the homes of famous performers and would be willing to share, please let me know.  Carnegiemagic@aol.com
Posted by Carnegie