Houdini performed at Hammerstein's many times. I decided recently to try and dig up information on this historic location. I discovered that Hammerstein's Victoria opened in 1899 as a legit theatre. However, it did not have a single broadway hit, so in 1904 it was turned into a variety theatre and became the leading Vaudeville house in NYC until the Palace Theatre was built.

Hammerstein's was unique in that it had an indoor theatre and a roof top theatre that allowed for summer performances. Back at the turn of the century there was no air conditioning and the theatres would often close during the summer months.  Others that tried to remain open would get brutally hot inside. Hammerstein's Roof Garden encompassed the roof of his theatre and the Republic Theatre next door. Incidentally, Oscar Hammerstein built the Republic Theatre as well but leased it out.

The theatre was at the corner of West 42nd St. and 7th Avenue. During Matinees at Hammersteins the ticket prices were .25 and .50 cents. In the evenings the prices ranged from .25 cents to $1.00. There were around 1000 seats, and I'm not sure what the roof garden held. A few of the acts that graced the stages at Hammersteins include; Eva Fay (daughter of Anna Eva Fay), Mae West, W.C. Fields, Charlie Chaplin, Eva Tanguay, Evelyn Nesbitt, the Four Cohans, and of course Houdini.

Hammerstein's plays an important roll in the career of Houdini. In 1912, Houdini was the headliner on the bill. Also on that same bill from Jan 29-Feb 3rd was comedy/satirist Will Rogers. A few months later in July 1912 Houdini was back. To promote his appearance he presented an outdoor escape. Reports say he was tied to the tower of the Heidelberg Building in Times Square. The New York Times says that after the escape he tossed the rope down to the crowd. However, other reports say he was placed in a straight jacket and hung upside down over the edge of the Heidelberg Building. He was going to repeat one of these stunts from the fire escape of the Victoria, but the police intervened. The Heidelberg Building stood at 1459 Broadway and was renamed the Crossroads Building and eventually torn down in 1984. Today the Times Square Tower stands in the same location. (see photo left) One other thing of note in regards to this stunt on the Heidelberg Building, the New York Times reported there was a movie camera there. Ifs this footage exists today, we would know for sure exactly what he did, and we'd also have more valuable film footage of Houdini. 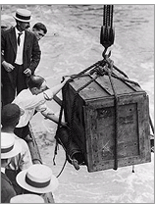 Also in July 1912 (he must have been driving the police crazy) Houdini was using his overboard packing case escape from the East River to excite people about his appearances at Hammersteins Victoria. He also did the feat in the theatre. A previous act had a large tank of water in the theatre and Houdini used it to recreate the underwater packing escape, it was just as big a hit indoors as it was outdoors.

In 1914 Houdini debuted is Walking Through a Brick Wall Illusion at Hammersteins. There is an interesting write-up in Variety Newspaper July 18, 1914 that says "some of the acts here have worn out the welcome mat. Houdini, however, proves an exception to the rule, and this P.T. Barnum of vaudeville is still a factor." They were were referring to his brand new Walking Through a Brick Wall Illusion and even go on to report an incident that took place between Houdini and Brick Layers Union.
Apparently the union brick layers had taken issue with Houdini because he was using a 'dry brick' system on his brick wall, meaning there was no mortar. The brick layers challenged Houdini to allow them to use mortar on the wall and then see if he could pass through, they did and he did.

There are precious few photos of Houdini and his Brick Wall. I find it hard to believe that he did not create a poster for this. To my knowledge no poster exists for this nor the Vanishing Elephant. But unlike the Vanishing Elephant which was presented as part of another show, this was Houdini's appearance at the Hippodrome and it also wasn't the only place he performed the Walking Through a Brick Wall Illusion. So maybe out there somewhere is a Walking Through a Brick Wall poster! One can only hope.

Houdini must have been one of the last big named acts to play Hammersteins Victoria because in 1915 the theatre was torn down. The competition from the new Palace Theatre down the street was too much for them.

It was not easy locating Hammersteins today. For one, it's right near Times Square and I was very confused trying to figure out which building was which. But then I discovered a clue. In the photo at the top of the page you'll see Hammersteins sitting on the corner. Then to the left of Hammersteins is a smaller theatre called The Republic. Well, I know Hammerstein's was torn down in 1915. The Republic was renamed The New Victory Theatre. The New Victory, which once was the Republic Theatre and had part of the Roof Garden Theatre on it's rooftop is still there. Of course, after all this searching I found that the address was WEST 42nd St. and that would have been a big help at the start.
Posted by Carnegie