Ford's Theatre & The Mantle of Magic 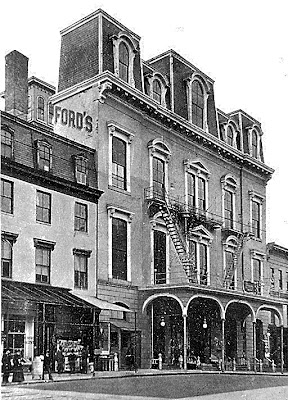 The name Ford's Theatre instantly conjures up images of April 14, 1865 the night President Lincoln was shot while watching a play. However, I want to direct your attention to the OTHER Ford's Theatre, the one in Baltimore. Both were built by John T. Ford, who in my humble appearance looks strikingly like Jerry Seinfeld.
The Baltimore Ford's Theatre was known as The Grand Opera House and was built in 1871. It was located on 320 West Fayette Street in Baltimore. It lasted until the mid 1960s when it was torn down to put a (wait for it...) parking garage in it's place. Readers of my blog will now the frustration I have over many of these historic theatres being demolished and turned into parking garages.
The reason Ford's Grand Opera House holds significance for magicians is that this is the location of the show where Harry Kellar passed the Mantle of Magic over to Howard Thurston. This established a long line of magic royalty that lasts until today (at least for publicity purposes).
Let's start with how it all came about. First it's the 1900's Herrmann the Great has passed away leaving it wide open for Harry Kellar to take over as the leading Illusionist in America. He's been following in Herrmann's shadow for quite a while and is ready to take over. Kellar is a unique character, older, less hair, but tremendously loved by audiences across the nation. He successfully fills the place left by Herrmann and becomes the leading magical performer in the U.S.. In 1906 he begins to announce his plans to retire. His successor will be Adolf Weber. WHAT? Yes, Adolf Weber was slated to be Kellar's Successor. OH wait, you might know him as Paul Valadon.
Paul Valadon was a magician who had been working at Maskelynes Theatre in England. He suddenly appears in America working with Harry Kellar and that also was the same year that Kellar mysteriously figured out how the Maskelyne Levitation worked and added it to his show. He might have gotten a little help from Paul Valadon. In 1906 Kellar proclaims that Valadon will be his successor when he retires. But that doesn't happen.
The first person to publicly say otherwise was Henry Ridgley Evans who saw Kellar's final D.C. appearance at the Columbia Theatre. Following this Evans writes a little note to Stanyon's Magic which says he predicts the successor will be Howard Thurston.  It's actually unclear when Kellar made this decision to go with Thurston over Valadon. Apparently, Paul Valadon had a drinking problem and Mrs. Kellar was not particularly fond of either Paul or his wife. So Paul is out as successor and is no longer working with Kellar. By 1913, Paul Valadon, one time possible successor to the Great Kellar is dead. The last few years of his life were not good, his wife either left him or she died. He had a son, but when Paul Valadon died, he had not one dime to leave his young namesake.
Thurston it seems may have been in the running all along. In 1907, Kellar and Thurston met for dinner to iron out the agreement. Thurston agreed to buy the entire Kellar show for $5000.00. Howard Thurston had made a name as a Card Manipulator. But he knew in order to gain a bigger piece of the showbiz pie he'd have to expand his repertoire. So he began to expand his act and he took it on an overseas tour. By the time he returned to the states in 1907 he was ready for bigger things. It's interesting to note that Houdini was not in the running for the prize of Mantle of Magic. No doubt Houdini couldn't be happy about this. But Houdini presented a specialty act of escapes only at this time. Later he would begin to add features like Vanishing an Elephant and Walking Through a Brick Wall. Perhaps if he had done this sooner or if Kellar had waited to retire then Houdini could have been considered. Houdini's friendship with Kellar doesn't really begin until after Kellar retires, so that his another reason why he was not in the running. No, this prize went to Thurston and he would make the most of it. 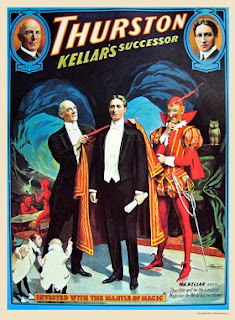 The two magicians had toured the country together in the 1907-08 season. The passing of the Mantle of Magic took place on May 16, 1908 at the Ford's Theatre in Baltimore Maryland.

To quote Howard Thurston the night of the final performance, "Before the final curtain had fallen Kellar led me to the foot- lights and in a most touching speech briefly mentioned his own career of forty-five years as a public entertainer, and finished with a generous and affectionate prediction of my future. Kellar had played Ford's Opera House for many years. He handed
his arm around my shoulders, while the orchestra played 'Auld Lang Syne'. As the ushers carried many floral offerings to the stage, the audience sang with the music. Finally, the musicians stood, then the entire audience was on its feet repeating the refrain. Leaning heavily on my shoulder as the curtain dropped for the last time, Kellar cried—so did I."
History shows however that Kellar was not completely happy with Thurston's use of his old show. Thurston basically dropped everything except for the Floating Lady and the Spirit Cabinet. Thurston's presentation of the Floating Lady enraged Kellar. Thurston would invite audience members to come up on stage to see the lady in mid-air. This would reveal the method of course and that drove Kellar crazy.
Kellar soon began work on another floating lady that I believe ended up with Blackstone, but not until after Kellar had passed away.
Thurston continued holding the crown until his untimely death in 1936. But before that he did make an announcement as to his successor would be. In 1929 on stage in McConnelsville, Ohio, Thurston announced that McDonald Birch would be his successor. But the Great Depression made theatre performances harder and harder and the proposed final tour with Birch never happened nor did the passing of the mantle.
Magic lore would also have you believe that the mantle was then passed over to Harry Jansen (DANTE). But Dante was overseas touring when Thurston died. The truth is, the mantle of magic set up by Kellar died with Howard Thurston. Magic groups in America wanted Dante to come home and claim the the mantle that Thurston left behind, but that is hardly the same as having the mantle bestowed upon you by the KING.
The romanticized version sounds so much better doesn't it? I like the idea that the Mantle of Magic went to Dante, then to Lee Grabel and finally to Lance Burton. But, it's not the Kellar/Thurston Mantle, it's a different one.
One final note about Ford's Theatre. Some smart magician took wood from the stage floor of Ford's Theatre either before or as it was being torn down. The wood was turned into a magic wand with a profile of Kellar on one end and Thurston on the other. If you hold it up to a light source it casts the profile shadow of the two magicians. For the record two of these were made and one resides at Egyptian Hall West, the Mike Caveney Collection.
Posted by Carnegie