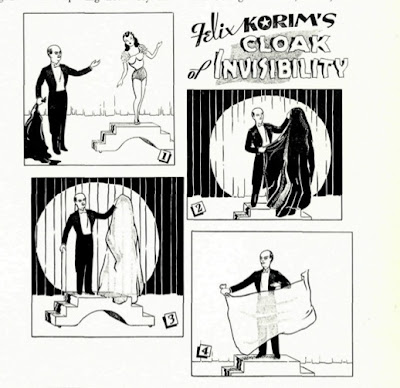 Before there was Harry Potter and Mac King, someone else apparently invented The Cloak of Invisibility. This dates back to 1949 and was the creation of a fellow named Felix Korim. It's clever to say the least. Basically the effect begins with a girl being covered with a jet black cloak/cloth. The cloak gradually changes color and becomes transparent. The cloak is then removed proving the girl has actually vanished. I love the fact that the illustration doesn't give away the method, but in a subtle way it does. A very visual effect for 1949 and quite ingenious.
Posted by Carnegie

Email ThisBlogThis!Share to TwitterShare to FacebookShare to Pinterest
Labels: Magic