It is ironic that the man who took his name from Robert-Houdin and then later wrote a book slamming his former idol would use a routine of Robert-Houdin's in his very own show.

In Chapter 9 of The Unmasking of Robert-Houdin, Houdini writes “Supreme egotism and utter disregard for the truth may be traced in all of Robert Houdin’s writings…”. I really couldn’t contain my laughter reading that line because the very same thing could be said of Houdini. On top of that Houdini referred to his former idol as ‘The Prince of Pilferers’.
Books have been written about why Houdini was wrong, and it surely wasn’t his best moment to say the least. However, we should be thankful that Houdini chose to recreate a piece from RH because that piece still survives today.
In 1913-14 Houdini was in Europe and along with performing he was buying lots of magic. One of the things he purchased was from a Parisian magic dealer, Charles DeVere. The item was a replica of The Transparent Cashbox used by RH. Houdini called it The Crystal Casket. 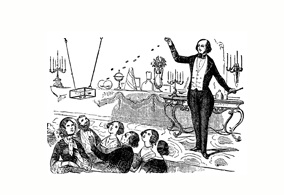 In Robert Houdin’s show he referred to the routine as ‘The Traveling Coins’. The routine began with Houdin borrowing eight coins from members of the audience and he made sure each person marked their coin for later identification. The coins were dropped into a glass vase that he was holding. On the stage was a second glass or crystal vase. RH would tap his wand against the vase he was holding and a coin could be heard to drop into the vase on the stage.
This continued until the eighth coin which RH apparently gave to a woman to hold, yet when he tapped her hand that coin too vanished and ended up inside the crystal vase.
At this point, RH hung a crystal cashbox, about the size of a cigar box, on two ribbons and then swung it back and forth. When the box was furthest away RH would toss the eight coins in his hand and they could be heard to appear all together inside the crystal cashbox. The coins were then removed and given to their owners.
Houdini’s routine was different. In Houdini’s routine, he would first show the cashbox empty. I’m pretty sure the crystal box would already be hanging by the ribbons on the stage as he showed it and then he swung the empty cashbox in the same way the RH had done. On a table downstage was a stand holding eight coins, no doubt what we know today as a Vanishing Coin Stand. Houdini would remove the eight coins and toss them all at once towards the Crystal Casket and the audience could hear the clinking of coins as they appeared at once inside the crystal clear box.
More than one book I read said the coins appeared one at a time inside the box, but I am not sure this is accurate. Houdini did pick up the coins ‘one at a time’ but he tossed the supposed handful at the box.
This is a beautiful piece of Victorian Age magic. The Houdini Crystal Cashbox went to Dash upon Houdini’s death and later found it’s way into the McManus Collection. From their it found it’s way in 1974 into the Salon DeMagie, better known as The Ken Klosterman Collection.
I had the good fortune to see the Crystal Cashbox live and in person. It’s a beautiful piece and coincidentally it’s surrounded by other incredibly beautiful pieces of apparatus made by Robert-Houdin. It may be the only crystal cashbox that survives because in the book “The Magic of Robert Houdin-An Artist’s Life” by Christian Fechner they use a photo of Klosterman’s Crystal Cashbox/Casket. It's a breathtaking piece of apparatus. 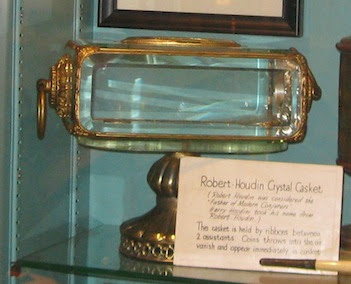