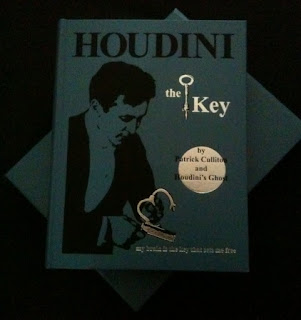 I was so excited when a package arrived for me recently. It was like Christmas morning times 10! The excitement was over a new book that Patrick Culliton wrote called "Houdini-The Key". This book basically gives the origins of all of Houdini's tricks, the presentation he used, in some cases the music and patter and the best part, the book explains HOW they were done.

Now having been involved in escapes for many years, I probably know the majority of this stuff already but there are is much that can be learned from the greatest escape artist to ever live. It's kind of funny because reading one passage in the book about Houdini's first encounter with handcuffs as a kid brought back memories of my first encounter with cuffs.

I was in my teens and I received a pair of handcuffs for Christmas. I received a lot of gifts that year, but the cuffs were by far the coolest gift to me. Once all the presents were opened I went upstairs and locked the cuffs on my wrists and sat there examining them while they were on. I was of course able to get out using a key, but I wanted to get out WITHOUT a key. So I sat there contemplating what to do and eventually stumbled upon a method. Sure enough, the method worked and I was off on the wild world of escapology! More on that another time.

This book, 'Houdini -The Key' is simply amazing. I was up until 2 a.m. last night reading it and had to be up early today for a show. I actually brought the book with me so I could read right up until showtime. I can tell you that later in the day I'll be heading to the storage unit to pick up my collection of cuffs. I've got the jones to put them BACK in the show.

Just gazing through the book it appears that Houdini might not have been the creator of the Milk Can, though I haven't read that chapter, I only saw a small notation about someone who was involved. I hope it turns out that it was Houdini's as it's one of his best. The origins of the hanging Straight Jacket escape are just too wild. I won't spill it here, but you wouldn't believe where he got the idea, or better, WHO gave him the idea.

I think my favorite part of the book though is the handwritten inscription that Patrick Culliton put in the back of the book. That was just a classy touch. I don't know if there are any copies left, but for my magic friends interested you can go to HoudinisGhost.com to and see if you can order one of the last copies. For none magic friends, sorry, the price is probably too much for anyone NOT a big Houdini fan. (But it's very worth it for those of us that are!)
Posted by Carnegie