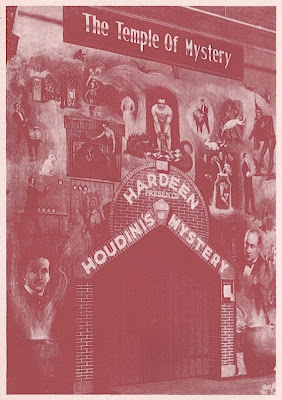 In 1918 Houdini was a busy man. Among his many projects was the creation of a Temple of Mystery. This was going to be a theatre in NY devoted to magic. Part theatre and part museum, the Houdini Temple of Mystery would employ all the latest gadgetry and gizmos to make the experience fun and educational for all who attended. However, it was not to be. Friends cautioned Houdini not to get involved in such an expensive project during war times.

The idea apparently was not completely dead. Jump ahead fifteen years and Houdini has long passed on. Hardeen however is now the busy performer. During a 1933 summer run in Atlantic City Hardeen opens The Houdini Temple of Mystery on the Steel Pier.  From reports of the time, the hall was very large and his run was quite successful. Jim Collins was his chief assistant and Mrs. Collins acted as stage manager.

Hardeen presented a full show of escapes, magic and illusions. Much of the material was Houdini stuff but there was a lot of Hardeen magic there too. Bess Houdini visited the show once and was acknowledged by the crowd. There was more than one theatre on the Steel Pier and at one point Hardeen was competing with the comedy duo of Amos & Andy for tickets. One Sunday afternoon, Hardeen had 67,000 people show up during his shows that day. I don't know how many shows he did but that's a crazy amount of people. It was a record setting day for the Steel Pier and he beat out the crowds that attended Amos & Andy's show.

Hardeen, who was in his late 50's at this point, was doing the Underwater Packing Crate Escape, TWICE DAILY from the Steel Pier, this according to a blurb in the July 1935 Issue of The Sphinx. 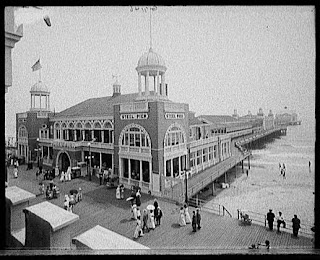 The Steel Pier originally opened in 1898. It was an important Atlantic City landmark and a popular place for entertainers to play. Some who worked the Steel Pier besides Hardeen include: W.C. Fields, Benny Goodman, The Three Stooges, Bob Hope, Frank Sinatra, Glen Cambell and many more. The Pier was destroyed by a fire in 1982 and was rebuilt by the Trump Organization in the 1990's and is still there today.


*One note. I understand the Nov. Genii has an article on Hardeen appearing on the HBO series Boardwalk Empire. I haven't read it or seen it and I HOPE I have not duplicated anything that was in the article, though I have a feeling the article just dealt with having Hardeen's character in this TV show.
Posted by Carnegie