Blackstone Auction by Potter and Potter


On Oct 28, 2017, Potter and Potter will have another auction, this time The Blackstone Auction. The bulk of this auction comes from Dan Waldron's collection. And I should add, what a collection it is! Looking over the catalog, there are things here I didn't know still existed. I remember, the Blackstone Jr. Auction from a few years ago. There were a few Harry Sr. items in that auction. But this auction is mostly Harry Sr. with only a few things from Harry Jr. and then a whole lot of other historical  magic items as well.

Some of the highlights for me are the costumes. Wow! The Harry Blackstone Sr. tuxedo is remarkable because it looks JUST LIKE Harry Sr! You could make no mistake of who owned and wore this tuxedo. Much like Harry Jr who had very signature looking tuxedo jackets, this one has a particular cut to it that just screams BLACKSTONE!

There are many costumes from the female assistants too and they are incredible. One small let down, there are none of Adele Friel Rhindress's costumes. She was the Elusive Moth in the Blackstone show. But still the fact that these other costumes survive is amazing.

There are also two male tuxedo jackets that belongs to the male assistants. These come with a photograph with Harry and two gentlmen wearing the very same jackets. These would look amazing in a museum display recreating the image in the photograph!

My favorite costume here other than the Blackstone tux is the Lantern Jacket, worn during the Lantern Trick. This also comes with a photo of the costume as it appeared in the show.

I've got to admit, I'm also quite enamored with the artwork contained in the auction. There are a 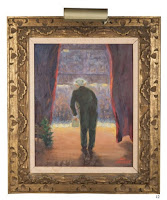 number of really wonderful drawings and paintings. The standout painting I think would be the one which is featured on the cover of the auction catalog, by artist Salvatore Salla. Mr. Salla had a number of magic related paintings over the years and this one is wonderful.

I also really like the painting that former assistant and famous in his own right, George Johnstone painted (see image right). There are also two paintings by one of Blackstone's former wives, Inez Blackstone which are really amazing. I think those would have an even more collectable appeal because one depicts Blackstone and was painted by his wife!

Another one of the true gems of the auction are the Blackstone Scrapbooks. There is one that is listed as 'Pre-Frederick and Pre-Blackstone'. WOW! This was when Harry was still Harry Bouton, and performing with his brother in the act known as Straight & Crooked Magic. There are other scrapbooks as well, some from the 20s, some from the 40s, some from Blackstone assistants. Countless unpublished photos within.

You'll find photos, posters, personal belongings, props, like Blackstone Sr's birdcage and much much more. Then you'll also find a few items from Harry Jr., like Harry Jr's birdcage, a signed handkerchief,  and even a special Casadega Cabinet built by Bill Smith. There are 6 pages of Blackstone Jr. items.

Then we come to the section on apparatus. There are many great pieces, but hidden among them is a Houdini item. A pair of Houdini's Lily Irons, known as King Breakers. I'm going to have an article about 'King Breakers' on the blog in October, so I'm not going to say a lot about them, other than you should check them out.

For the Houdini fan, you'll find a few Houdini items in the books section. But when you get to the Ephemera section, you'll see a photo of Harry, that I sure don't recall, though maybe it is familiar to other folks. This photo is inscribed to Professor Hoffmann, of Modern Magic, Later Magic and More Magic fame.  There are a number of Houdini items including letters, other photos and something that solves a mystery that I had been working on. Again, there will be something on that next month. (Yes, expect a lot from me in October)

Also, of note in the Ephemera section are three works of art by Okito, called Marquetry panels which are inlaid wood used to create a picture. They are incredible.

Just when you think you've gotten to the end of the catalog, there is one more section, the final one is the Poster section. There are eleven pages of vintage magic posters. Some of the highlights here include Carter-Sawing in Half, Thurston Million Dollar Mystery, and Thurston Whippet, and a Chung Ling Soo/Suee Seen poster among many others.

All in all, another impressive catalog and will no doubt be another exciting auction by Potter and Potter. The auction takes place October 28th, 2017. Please visit their site for more information and to order the catalog or download it.

All the photos above come from the Blackstone Auction Catalog and are used with permission of Potter and Potter Auctions.