A Special TCM Thanks For Dorothy and Dick

I was not present at the special screening of The Grim Game last Sunday at the TCM Classic Film Festival. I was surely there in spirit however. Much has been made about how this 'lost' movie found it's way to the light of day. Frankly, it was Dorothy Dietrich and Dick Brookz who took the initiative to get the ball rolling and thankfully helped in bringing this film to the light of day again.

In addition to all Dorothy and Dick did for The Grim Game, they were also special guests at the TCM Classic Film Festival and they gave an introduction to Houdini. Before the screening of The Grim Game, Dorothy presented a straightjacket escape and did a card routine using one of Houdini's actual vests. It set the mood for what was about to happen and the folks at the TCM Classic Film Festival were thrilled. They sent Dorothy and Dick a very glowing letter of thanks, and D&D shared it with me to share with you all. 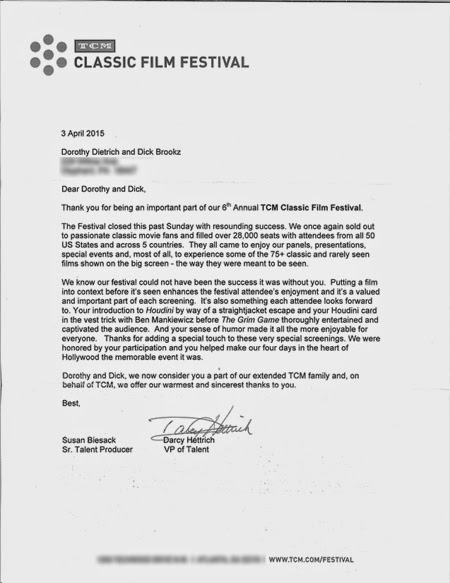