Maid of the Moon Addition 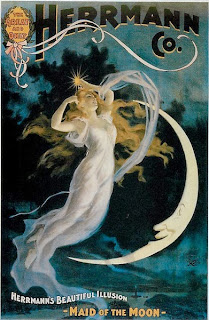 I wrote an article on an intriguing levitation illusion that had been presented by both Harry Kellar and Alexander Herrmann. It was called Astarte or the Maid of the Moon. I had also posted a video of Doug Henning recreating the illusion for one of his TV specials. Well, at the Los Angeles Conference on Magic History 2013 this illusion was recreated by John Gaughan. And in the January 2014 Digital version of Genii Magazine you can watch a video of the illusion. It is beyond incredible. You  have to check it out! It is a real thing of beauty!