My previous article about the statues dedicated to magicians points out that there are no HOUDINI statues. However, there isn't a shortage of Houdini busts. It's not likely I'll get all of them captured here, but I'm going to try and get the top ones.

First up is the classic Houdini Bust that we all know, the bust on top of his grave. The original bronze cast of this bust resides in The Museum of the City of New York. This was the creation of sculptor John Cassidy of Manchester England.  After Houdini died, this bust became the property of the Hinson Family. Mr. and Mrs. John A. Hinson donated the bust to the Museum in 1958.

Copies of this bust have been part of the Houdini Grave Site since his death. Sadly, many of those copies were stolen or destroyed.

This plaster copy was recovered recently. It was believed to have been stolen from the gravesite in 1975. John Cox has a full report about the stolen/recovered bust at his site. This plaster copy now resides in the AKA Houdini display in Appleton Wisconsin. 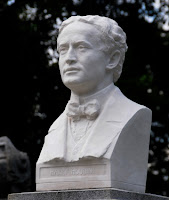 Thanks to the valiant efforts of the Houdini Museum in Scranton PA, a fully restored bust was placed back on the grave site.  Dorothy Dietrich and Dick Brookz are the curators of the museum. They are now the keepers of the grave site from what I understand.I accidentally left them off of here when I first posted this. My apologies to them because they deserve a huge thank you from all Houdini fans and magic fans for the work that they have done!

Without their tireless efforts there would be no bust on the Houdini Grave site today.

There have been various reproductions of this bust over the years in many different sizes. Some lack the quality of the original and even the look. But they are interesting none the less. One of the best was done by Collectors Workshop but I don't have a photo of the bust they produced. It was identical to the Cassidy bust. 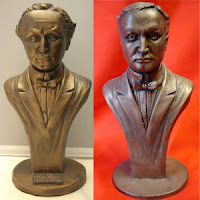 These two busts were done by artist Joseph Juneau for the Houdini Magic Shops. The one of the left is called 'The Great Houdini' while the other one is called 'The Young Houdini'.

They are cast in resin and stand about 10 inches tall. 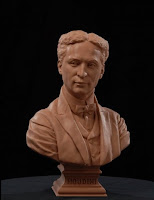 Next we have the latest Houdini bust, this time by the artists at Spectral Motion. It's an expensive one, $2000.00, but the bronze cast version is breathtaking. They actually produced several busts of magicians, including: Harry Kellar, Howard Thurston, Robert Houdin and Chung Ling Soo.

I think I like this one the best out of all the various busts. It has a little more character to it and shows Houdini at a younger age. I do not think the HOUDINI bust is available any longer however. 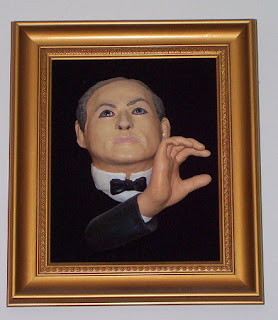 Finally, I'd like to show this unique piece. I'm not sure it fits within the traditional bust format, but it is very cool. Unfortunately, I don't recall the name of the artist. I know there was talk of him making several of these in the future of other magicians, but I only ever saw this one. This particular piece is from my own collection.


There are a number of other busts of Houdini in different poses and styles. I'll post links to those below and if I happened to have missed any, let me know and I'd be glad to feature them here, or at least put the link up.

Gifts4Magicians.com has a very nice Houdini Pewter statue which can be seen here.
Sculptor/Artist Robert Toth has a very nice Houdini bust which can be seen on his website.
Sculptor Peter Close created this Houdini bust for this website
A company called BizzareProps.com features this bust, which they say only 50 were made but I don't see where it's available now.
This final bust is being sold by StevensMagic.com. Apparently, it is a reproduction of a bust that Houdini himself owned.

MORE
I shouldn't have been half asleep when I posted this because I missed some stuff. I forgot to add the photo from the Houdini grave about and give Dorothy Dietrich and Dick Brookz proper credit. Also, John Cox over at WildaboutHoudini.com has posted an article about an old issue of Genii Magazine with a picture of a unique Houdini bust on the cover.

I just got this note from Dick Brookz and Dorothy Dietrich, "There was a small hollow olive drab dark bronze colored Houdini bust about 8" tall that I believe Bess herself used to make and sell or give out. It was similar but slightly different from the John Cassidy one. We have two or three in our collection.  We experimented in making these before we attempted the full sized ones.  We even sold them in the store for a while.  We may make some more when time permits.

The final large mold was made of expensive Platinum Silicon which should last 20 to 30 years.  We made several large busts out of different materials until finally we made 3 expensive statuary cement ones, with the best one destined for Houdini's grave site after it was sealed with a special sealer."


I wonder if the greenish colored one above is one of the one's that Bess gave out???

EVEN MORE
John Cox sent me this link of another Houdini bust, which might be one of the ones that Collectors Workshop put out in the 1990s. 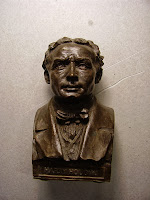 Here is an image, courtesy of Joe Fox, of the Houdini bust that was given out to attendees of the Society of American Magician's Centenary Celebration. This was during the 2002 SAM National Convention. Only 1000 were made and I think it's rather small if I'm not mistaken.

this original article was first published on August 12, 2012
Posted by Carnegie