Joe Fox has really gone the extra mile and provided me with some great photos of MORE Houdini Busts. Just when you thought you'd seen them all, a few more pop up! 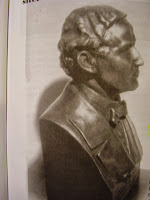 First is the Collectors Workshop Bust called 'The Houdini Bronze'. The bust stands 14 inches tall, weighs approximately 15 pounds and rests on a polished wooden base. Many years ago, I visited Nick Ruggerio at the Collectors Workshop-Workshop. And he had one of these busts in the office. I remember holding it and hearing Nick tell the story of how they went about recreating the bust. It was a limited edition of only 18. As I recall it had a pretty hefty price tag at the time.


Next, we have an unusual bust that Joe Fox can't recall where he got it. But it's clearly Houdini 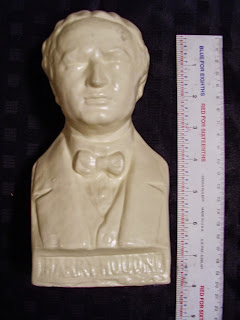 though not of the same quality and craftsmanship as some of the other busts. I'm wondering if this was maybe a plaster cast that was sold and people could paint them on their own. It has a similar look to the copper colored bust in the article
Houdini Busted!

It appears maybe to be a copy of a copy because some of the details are less visible on this particular bust. Though it could just be the white color, which makes it look like a white chocolate bust of Houdini......(that sounds rather cool). 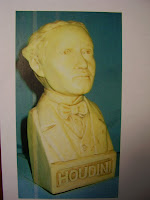 Gary Frank, the magician and historian offered this Houdini bust a few years ago. It's 9 1/4 inches tall and weighs approx 5 lbs. It was limited to 200 pieces and the ad for the bust mentions it was the first in a series of magic busts. But I don't know if any others were created.


The final two don't actually fit into the category of BUST. But they are statues of Houdini. The first

one is a ceramic covered Beer Stein. I want to say the Fox Brewery from Appleton commissioned this but I'm not 100% on that. The one in the photo is Joe Fox's (no relation to the Brewery). Mine is in storage so I can't look at the bottom to read what it says. But it's a very cool. The stein is 9 1/2 inches tall and will hold 26oz of liquid. 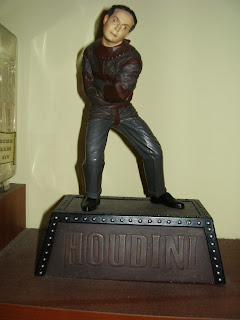 The final 'statue' was done by sculptor Mo Flint. His statue of Houdini in a Straightjacket is incredibly
striking and looks 100% like Houdini. I had contacted Mo when these were first announced and he was hoping to do other Houdini statues if these sold well. But I think the sale of these statues was a little disappointing. From what I've heard, the run was supposed to be 500 but only 250 were ever made. No other magic or Houdini statue followed.

A friend of mine who is an amateur sculptor created a Houdini statue for me many years ago. It was a statue made from the image on the left. It was an amazing statue. It stood a little over 12 inches tall and my friend put real chain on where needed. The reason I cannot show it to you know is ole Houdini in Chains committed suicide! One day he fell off the shelf he had been displayed on and came crashing into too many pieces to repair. Sadly, I never took a photo of the amazing piece of art, my loss.


*Special Thanks to Houdini Historian and all around great guy, Joe Fox, for sharing the above images from his collection!
Posted by Carnegie