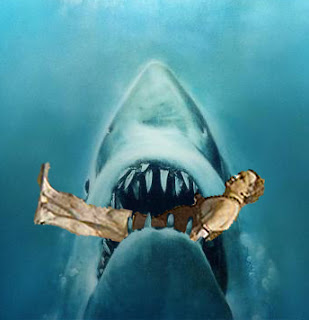 Turns out the story of Houdini catching the coins in his mouth with sharks around was not the only shark story for Harry. During his trip to Australia in 1910, Houdini was an invited guest of the Navy on-board one of their ships. While there, he accepted a challenge from the sailors to be shackled and tossed overboard. Certainly, not the kind of thing you and I would want to do, but this is Houdini and it's just average afternoon for him.

The sailors shackled up the escape artist securely and Houdini jumped into the awaiting ocean. I could just imagine countless sailors leaning over the side of their ship watching as Houdini hit the water and sank below. They all probably were trying to get a view of what he was doing. As soon as he hit the ocean floor, some thirty feet down, he began to free himself from his confinement. This is where the story takes a turn. The moment Houdini raised his head away from his shackles and got a glimpse of the area around him, he discovered that he dropped right into the midst of a large school of sharks.  I'd venture to say there is a good chance a Great White Shark could have been among the creatures as they are known to swim & breed in the waters off the Australian coast.

He was underwater for three minutes working feverishly to extricate himself from the shackles. According to Houdini, "I never worked so fast in all my life!" Then he did something that is very out of character, he left the shackles behind on the ocean floor. His only thought was being able to push himself up off the ocean floor with enough force as to bypass all the sharks and not get attacked. That is just what he did, with all his strength he pushed off from the sandy bottom and shot past the sharks. As be burst forth out of the water, sailors standing by in a lifeboat grabbed him, apparently just as a shark was coming up out of the water after Houdini. The newspaper article says "he was pulled aboard just in time to miss the snapping jaws of the predatory sea bandits."


This story came from the January 7th,1912 edition of the Philadelphia Inquirer.
Posted by Carnegie