I've only ever seen one company that Houdini did a product endorsement for, Zam-buk. I often wondered if there were others and recently I came upon an advertisement using Houdini's image and name. It must have been part of the terms of a Challenge, to allow the company to use Houdini's name in an advertisement.

This is the James Henley Brewery of Providence RI. They were in business from 1861 till the late 1950s. On March 1, 1915, on stage at the Keith's Theatre in Providence Rhode Island, Houdini accepted a challenge from the Henley Brewers to lock him up in a barrel full of beer. The following evening on March 2, 1915, Houdini presented his usual act of The Needles, Water Torture Cell and The Challenge. I'm not sure what order, he may have done the challenge first. In any event, on March 3rd, The Pawtucket Times recorded the following:


Houdini had been submerged for three minutes in a barrel of ale which then had four padlocks placed on it... He appeared smiling in three minutes, remarking that the ale "did not even stagger him".

The ad below appeared in the March 8th, 1915 edition of the Pawtucket Times. 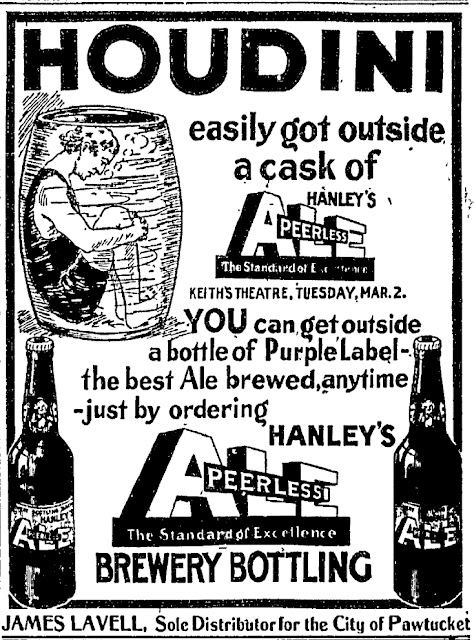