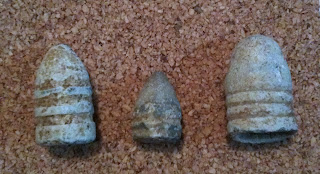 Yesterday I mentioned my small connection to the Civil War and the fact that I have several historical items from that time period. Above are three lead bullets that I found back on my farm and still have today. I'll try and locate the Union Army Belt Buckle before this series of articles is over.

Today though we explore yet another magician with a connection to the Civil War. This time one of the lesser known magi, William Augustus Reich, born on July 16th, 1833 in Salem North Carolina. He would later shorten his name to Guss Rich.

Gus was a tinsmith by trade. In 1860 he gave his first performance of a magical nature to a large audience at the Ole Salem Concert Hall. A year later the Civil War broke out and Gus became the drummer in a 26th North Carolina Regimental Band part of the Confederate Army. When not with the 26th Regiment he and his fellow band members put on performances to raise money for the confederate troops. The feature of every show was 'GUSS RICH - The Southern Magician!'.

On April 8th, 1865, the 26th North Carolina Regimental Band was captured by the Union Army and imprisoned along with other Confederate Soldiers. To their surprise, the following day they were released. Why? General Lee had surrendered to General Grant at Appomattox and this began the end of the Civil War. Gus Rich returned to his hometown of Salem NC.

After the Civil War, Gus adopted the moniker 'The Wizard of the Blue Ridge' and continued to perform magic until 1914 when he gave his final performance. He passed away in 1917.

Interestingly, the Wizard of the Blue Ridge still lives on today in a special magical play written by Max Howard called 'The War Wizard'. I had the good fortune to see Max present this at a magic convention a number of years ago and was enthralled with the Magic of Gus Rich! In May 2010, MAGIC Magazine did an article on The Great Southern Sleight of Hand Show, aka The War Wizard play by Max Howard.