In part 1 of this series, I told you about John Henry Anderson, The Great Wizard of the North who was actually Scottish. He was one of the early performers to present the Rabbit from Hat Trick. Anderson went into debt during the Civil War because he was unable to pull in the attendance needed for his shows. After a difficult run-in with the people of Richmond VA who didn't take too kindly to his title, "The Great Wizard of the NORTH" he stayed mostly in the Northern States and catered to Northern Audiences.

Next was a true southerner, William Augustus Reich, better known as Guss Rich, The Wizard of The Blue Ridge. Gus played drums in the 26th North Carolina Regimental Band and thus was part of the Confederate Army. His performances outside of his regular duties raised money for the Confederate Soldiers. He survived the war and lived a long life. 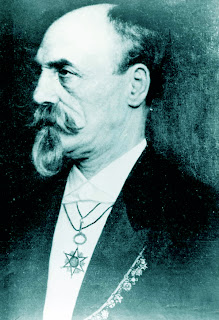 This time we visit another European who happened to be touring the United States just as the Civil War broke out. This person was Compars Herrmann, the elder brother of Alexander Herrmann. Compars was very well known all over Europe for his special brand of conjuring. In 1861, he came to America and began to perform in New Orleans. As the Civil War broke out Compars headed north to New York.

Unlike his competitor, John Henry Anderson who struggled during the War to bring in crowds, Compars was setting attendance records. Interestingly, both John Henry Anderson and Compars Herrmann used pirated Robert-Houdin props in their show. However, Compars had a huge advantage over Anderson in that he was also adept at sleight of hand. This ability set him apart from his competition and made him a must-see attraction.

In November of 1861, Compars Herrmann was in the Nations Capital to perform. The National Republican Newspaper wrote this about his performance, "This extraordinary magician gave his first entertainment in this city at the Theatre, last evening. The house was crowded to repletion by a large and fashionable audience. Mr. Herrmann in his performances fully realized all the wonderful things that have been said about him, and left the impression upon the minds of the audience that they had seen "Old Nick" himself." (Old Nick was another name for The Devil)

During his stay in Washington D.C., Compars Herrmann was invited to perform at the White House for President Abraham Lincoln and his invited guests. This took place in the East Room of the White House where many celebrities have performed over the years. At one point during his show, Herrmann handed a deck of cards to President Lincoln asking the President to shuffle the cards. President Lincoln handed the cards to his Secretary of War and said "This man shuffles the cards for me at present".

Compars Herrmann's assistant during this engagement was his 18 year old younger brother Alexander. Together they presented 'The Second Sight Routine' no doubt just like Robert-Houdin and his son Emile used to present.

In 1862, Alexander Herrmann went off on his own to perform and Compars remained.  Compars performed throughout the Northern States during the Civil War and in 1863 he left America and headed to England. It seems that Alexander didn't come back to America until 1869, after the Civil War had ended.