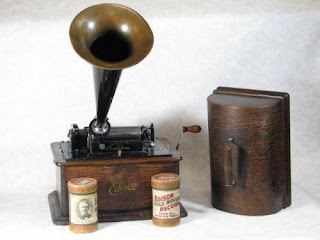 Yesterday during the Essential Magic Conference, David Copperfield took all the viewers of the conference on a virtual tour of his museum. One of the stops along the way was the Edison Wax Cylinder Recording of Houdini's voice. Houdini fans have heard this before no doubt. But something struck me as odd when I first heard Copperfield play it back. 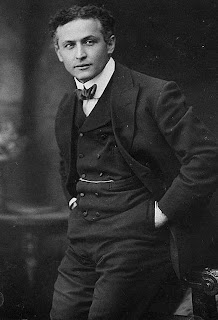 It's slightly different than the version I had heard in the past. My guess is that Houdini recorded this speech several times, but I had never heard anyone ever mention that fact. Proof of the 'different' recording was not easy as I had to replay the Copperfield clip and then find one of the other clips. The speech pattern is almost identical. However, there was one giant give-away when on the Copperfield clip Houdini is heard to say "after it has been filled to the brim with water". But on the clips you can find on youtube and other places, Houdini says "after it has been filled with water". NOT 'filled to the brim', but just 'filled with water'. There are a couple other changes in script as well, so it is a different version.

Though not a major discovery, I'm wondering if anyone else picked up on this. You can listen to Houdini speak below. But you would have had to register for the EMC 2011 Conference to hear the other version. If you did, it's on Session 9.

UPDATE: John Cox over at WildaboutHoudini.com has an article about the original 'first' discovery of the Wax Cylinders. http://www.wildabouthoudini.com/2010/11/houdini-speaks-in-1970.html