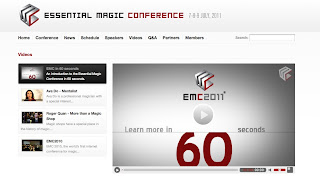 I'm a big fan of Luis DeMatos's magic. And so his Essential Magic Conference that he puts on along with his partners, Marco Tempest and David Britland is a must see for me. This is the worlds ONLY online magic conference. I mentioned a few days ago that David Copperfield would be conducting a tour of his museum. Indeed he did. And indeed it was FANTASTIC! What did he show? Houdini's Sub Trunk, Milk Can, Water Torture Cell, several posters and he even played the Wax recording of Houdini's voice*. 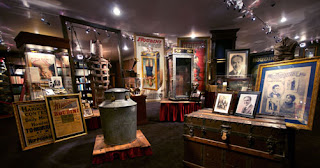 The talk that William Kalush did on 'Why Houdini is Still Popular 85 years Later' was brilliant!  Mike Caveney's talk on the Walter Jeans Millions Dollar Mystery was great then he followed it with a video of him performing Carter The Great's Million Dollar Mystery.

I've not yet had a chance to watch the entire conference, but I can tell you that every single thing I've seen so far has been great. Watching Rene Levand perform was breathtaking. And I tell you, I really enjoyed both of Paul Daniels' talks and performances. The Buck Twins make you stand back and just say WOW. Jordon Gomez's act with CDs fooled everyone even after he had already explained most of the effects before he did the act. It's so great to have Rudy Coby back in magic and see him do his magic. David Kaye was on hand to talk about kids magic in a very mature manner and both of his talks were superb.

The talent present at this event is awe inspiring and the generosity of the speakers is beyond compare. I'm looking forward to watching the rest of the conference and rewatching my favorite parts. They outdid themselves this year and I can't wait to see what surprises they have in store for 2012.
Posted by Carnegie

Email ThisBlogThis!Share to TwitterShare to FacebookShare to Pinterest
Labels: EMC2011