Meeting The Magi - The Eyes

When last I wrote I mentioned my first encounters with Cesareo. Up until now, he did all the talking and I did all the listening. The time had finally come for dialog. We sat down together after touring the Cabot Street Cinema Theatre's workshops, and he began to speak.  "So Dean…" he said, followed by a long pause.  "How are you?" he asked. My mind was racing to find the appropriate words to answer his question. "Wonderful Cesareo, very very thankful to you for showing me so much" was my reply.  "No, No, How are you?" he repeated. Did I miss something? What was he trying to ask? I told him how overwhelmed and astonished I was. Cesareo smiled and looked at me and softly said "How are you? How is your health, how are you feeling?" He wasn't concerned about magic or the tour he had just given, he was concerned about me as a person. And this is where the real magic began.
After a few moments we went downstairs to the lobby of the Theatre. There were a couple of chairs sitting there that hadn't been there earlier. We walked over and sat down and he began to reveal details about me and my life that he couldn't have known. He was telling me about how so many magicians are so pompous, so selfish and self centered. To illustrate the point he showed me a photo of himself with two very famous performers.  As I looked at the photo he asked me "What do you see?" I knew that whatever my answer was, it would be wrong. Then he said "Look at the picture and tell me who has 'the loving eyes'?"

It was apparent immediately who had 'the loving eyes' in this photo. Cesareo had the look of someone who was caring, compassionate and humble. The other performers were trying to impress the camera and you could see it. In all my days I'd never looked at a photo that way before. Yet as he pointed it out, it became crystal clear.
He spoke at length about this quality of 'loving eyes' and about caring and giving and sharing with others. From the stage he projects this quality and the audience loves him in return. Cesareo has a genuine love for people and you sense it when he is on-stage and off.
This loving quality is sadly lacking in our modern society, especially in the entertainment field.Today there is so much 'attitude' in entertainment. All of the attitude we are exposed to is negative and bad. Listen to the radio, watch tv shows, it can even be found in advertisements. The music industry is one of the biggest promoters of 'bad attitudes'. The media tries to make you believe that projecting this 'attitude' is cool or hip or contemporary. But one need not be a jerk to be cool or hip or contemporary.
I couldn't help but wonder as Cesareo was teaching me this lesson, how often I had tried to project an 'attitude' during a photo shoot or a performance. Perhaps at those moments when I was having difficulty connecting with the audience, the struggle had more to do with my attitude than theirs. I've often found myself after a show saying "well I killed em'!!!", meaning that they were really pleased. Hmmm, I wonder now who I was really pleasing?
In order to have this loving quality it can't just apply during the show. If you pretend to love someone they will quickly discover that you are a phoney. You have to dig deep and find this quality within yourself. Then you have to love the audience and also, the stage crew, your fellow performers, the sound guy, and frankly every single person.
I believe it was Howard Thurston the great Illusionist from the 20's & 30's who said, before he walked out on-stage he would repeat to himself over and over "I love my audience." I also recall Jack Lemmon, the actor,  saying the same thing during a television interview. Imagine what a difference this would make if all performers adjusted their attitudes in this fashion.
The performers of the Le Grand David show have made this attitude adjustment. Their show is a refreshing change of pace from what usually passes as entertainment. And you can sense it in every performer, from Cesareo right down to the newest member of the cast.
So the next time you are going to perform, instead of thinking to yourself "I want to go out there and kill!", try this instead, "I want to go out and love my audience." The best way to do that is to look at yourself in the mirror and check to see if you have the 'loving eyes'. 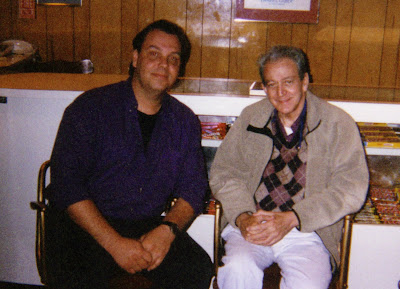