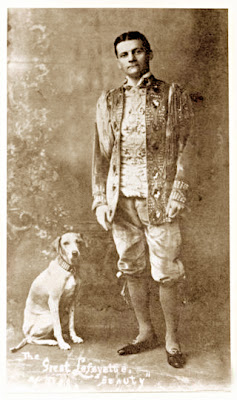 This is a story about a man and his dog. But not just any man and not just any dog. The man was Sigmund Neuberger who was born in Munich Germany on Feb 25, 1871. In 1890 he immigrated to the United States at the age of nineteen.

He began in show business presenting a variety show along with a partner by the name of Mike Whelan. They went out west, following the gold rush that a lot of the nation was going after. I'm not sure how long they lasted but eventually Whelan got tired of the bad conditions in the camps and he ended the partnership. Neuberger went off on his own with his act called "The Crackshot with the Bow" which was basically a sharp shooting exhibition with a bow and arrows. He presented his act in Vaudeville houses in the U.S. and by 1892 was working the theatres in England.

In 1898 his life would would change dramatically upon seeing a brand new act, the Chinese magician Ching Ling Foo. Foo created quite a stir in the magic world and many copy cat acts followed. Foo may have been somewhat to blame however as he offered a challenge to anyone who could duplicate his famous appearing giant bowl of water feat. A number of performers took the challenge and Foo and his management had to explain it was a publicity stunt. The damage was done however and the 'Chinese style magic acts' began to grow.


BEAUTY
By 1899 Neuberger added a few of the chinese magic feats to his act, and also began to add quick change costume routines as well as other original magic. The Great Lafayette was born!  On a tour through Tennessee, Lafayette ran into none other than Harry Houdini. They were both not quite famous and yet it would happen to them  very soon. They were playing the Grand Opera House on Cherry St. in Nashville. During their time in Nashville, Harry gave his friend Lafayette the gift of a dog. Not just any dog, this would become Lafayette's best friend and traveling companion. He named the dog Beauty and even created a fake pedigree for the dog. Where Houdini got the dog is anyone's guess. 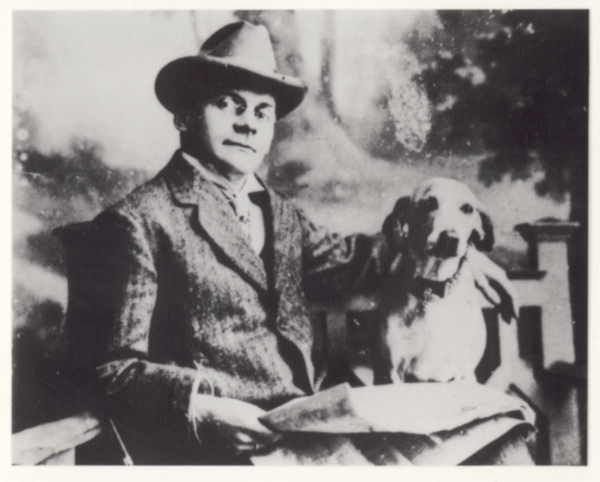 On the front door of his home in London Lafayette  hung a plaque that read 'The more I see of man, the more I love my dog'. Beauty had her own room and bathroom in the house. She ate five course meals. And an image of Beauty appeared on Lafayette's checks. She also was a member of the cast of his show.

MAGIC
Lafayette it appears was the first to present the Mid-Air Bird Catching routine. Several magic history books credit Lafayette as the creator, but the actual creator of the Birds in the Net was Cyril Yettmah. It should be pointed out that Yettmah worked for Lafayette so this could be where the confusion comes from.  Lafayette did create many of his own effects and illusions however. Probably his most famous magic illusion was called 'The Lion's Bride'. Apparently, he was the first magician to add a lion to his act, and would be followed by many other magicians after him, including modern day performers like Doug Henning and Siegfried and Roy. Not unlike Roy Horn who was severely injured by a tiger during his act, Lafayette was attacked on more than one occasion by his lion. None of his injuries were ever as bad as Roy's. 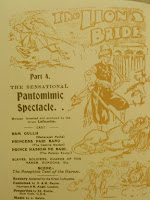 The Lion's Bride, as well as most of Lafayette's routines was wrapped within a story or playlet. The Lion's Bride storyline changed over the years but the basic effect remained. A live lion in a cage roared and moved back and forth in it's cage. A woman was placed inside the cage with the ferocious beast. The lion would get up on it's hind legs as if to pounce on the woman and then suddenly, it would be revealed that it was Lafayette in a lion's costume! Frankly, that is an amazing routine. Today you see the production of a lion or tiger but this idea of having a live lion suddenly change into Lafayette wearing a lions costume is just brilliant.

In one of the many routines that Beauty would appear in, Lafayette donned an artists smock and beret, and began to paint on a small canvas. He would break the paper from the frame and his dog Beauty would burst forth! 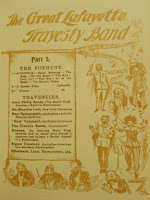 Another spectacle of the Lafayette show, which was called "A Carnival of Conjuring", were his impressions of band leaders. This was part of his 'Travesty Band' sequence. He would conduct the orchestra and change costumes instantly to reflect whatever bandleader he was portraying.

It's been reported that during his career he was the highest paid entertainer in Vaudeville. It's clear that Lafayette knew he had a fabulous show and he held out for the right money. He was involved in all aspects of the show including costume design, set design and creation of illusions. Looking over one of his programs it's a show unlike any other performer before or since.

TRAGEDY BEGINS
Life seemed to be going pretty well for Lafayette until May of 1911. On May 5, his most beloved friend in the entire world, Beauty, passed away. Lafayette had just opened a two week run at the Empire Theatre in Edinburgh Scotland. He was completely devastated. He made arrangements for Beauty to be buried in the Piershill Cemetery in Edinburgh. At first the cemetery officials would not allow the buried of the dog until Lafayette agreed that upon his death he too would be buried there. 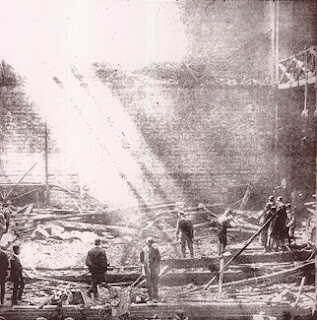 The old showbiz saying is 'The Show Must Go On' and though in a state of deep depression Lafayette continued his run at the Empire Theatre. During his performance on May 9th, 1911, Lafayette was taking his bows after concluding The Lion's Bride routine. An oriental scenic lamp burst into flames on the set. The fire curtain was dropped but did not fall completely to the stage. Lafayette was very guarded with his secrets and he had the exits locked off so as the fire began to get out of control, backstage was a nightmare. Within 18 minutes of the fire starting the stage was ablaze with fire and smoke. The iron safety curtain broke free and fell to the stage. Thankfully everyone in the audience escaped safely and without injury. But on stage they were not so lucky. Ten people lost their lives due to the fire that night.
Among the dead was the body of Lafayette who was discovered near the Lion's Bride Cage. He was identified by the costume and sword he wore during one of his routines. The body was sent to be cremated.

However, Lafayette had one more piece of magic after his death. Several days after the fire another body was discovered. This one had the jeweled rings on it's fingers that Lafayette always wore. Lafayette's burnt body was found again, this time under the stage. Apparently when the Iron Fire Curtain collapsed it covered over the area where Lafayette had died.  The body that had been cremated previously was actually that of his body double, a man named Richards who was also the trumpeter in Lafayette's orchestra and was only 25 years old. 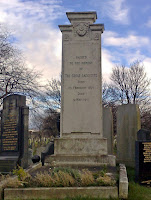 On May 14th, 1911 Lafayette's body was cremated and the urn containing the ashes of the dead illusionist was buried between the paws of his lifelong companion Beauty. They were now together for eternity.

The vaudeville and theatrical communities were devastated by the news. Houdini sent a floral display in the shape of Beauty to the funeral. He was unable to attend but made arrangements to have the funeral filmed. I discovered a site that apparently has film footage of the Lafayette Funeral. Whether or not the footage is that of Houdini's I cannot say. You can't view it at this location, but I'm assuming if you are in the UK you can make arrangements to view it. http://ftvdb.bfi.org.uk/sift/title/580880

Near the end of the book "The Life & Times of The Great Lafayette" by Arthur Setterington, he mentions a visit to the gravesite by Bess and Houdini. While there Houdini said about his friend Lafayette , "He fooled them in life and he fooled them in death, I envy him". 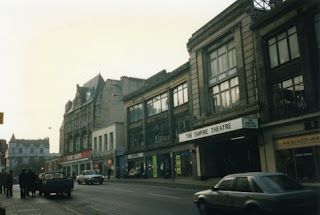 The Empire Theatre was rebuilt three months after the tragic fire in 1911. It continued to operate as a theatre until 1963 when it was turned into a Bingo Hall.

In the 1990s the Empire went through another transformation, this one pretty major. The entire outer facade of the building was redone and the theatre changed it's name. Today it's called The Edinburgh Festival Theatre. (see photo below)


Doing the research for this particular blog I was amazed at the number of sites that covered the tragic fire. Clearly the folks in Edinburgh have not forgotten that frightful day in 1911 even after all these years. I discovered some interesting things in the course of the research. One of them is a song called "The Tragic Tale of the Great Lafayette and his Body Double" which can be heard by visiting the link.

The most amazing thing I discovered though is the upcoming celebration taking place in Edinburgh.
On May 9th, 2011, we mark the 100th Anniversary of The Great Lafayette's Death. Just so you know, there will be a real celebration! It's called 'The Great Lafayette Festival' and will take place of May 7th-9th in Edinburgh, Scotland. Among the activities in a special show put on by Paul Daniels and Debbie McGee celebrating the life and magic of Lafayette. There will also be a tour of the back stage area at the Empire Theatre(Festival Theatre now) and you can stand in the place where The Great Lafayette's life tragically ended. To find out more visit their official website at http://www.greatlafayette.co.uk/

Also, check out my other article with MORE information on Lafayette http://deancarnegie.blogspot.com/2011/04/lafayettes-other-fire.html