Houdini and The Circus Busch 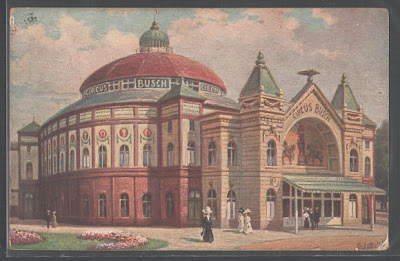 Founded in 1891, Circus Busch was one of the leading European Circuses in the world.  It was started by Paul Busch and seems to have it's origins in fairs or festivals that centered on weightlifting or strong man acts.  Over time more acts were added, including animal acts and many novelty acts.  By 1895 they put up a permanent building in the Bahnhof Börse in Berlin. They also had permanent locations in Vienna, Hamburg and other parts of Europe. 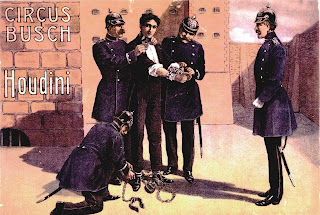 Houdini first appears at the Circus Busch in 1908 with his Straight Jacket escape and Milk Can Escape. This came as a surprise to the many handcuff act imitators who were expecting Houdini to show up with the act he had presented in Germany a few years before.

During another tour of Germany, September 21, 1912, Houdini debuted his original invention "The Water Torture Cell"at the Circus Busch. Houdini actually presented the Water Torture once before in England about a year and half before this, but that was before an audience of ONE. He did that in order to obtain a copyright of the act.

The Water Torture Cell became an instant sensation in Germany. Imagine Houdini's surprise to find out that his most Death Defying Escape was being copied by a female named Miss Undina. Houdini sent his lawyers after Undina to stop her from presenting his escape.

But then he did something interesting, he hired another woman 'Miss Trixy' to present the Water Torture Cell in Europe after he was gone. She was given a duplicate cell. Houdini was traveling with his own cell. So here is proof that yet another Houdini Water Torture Cell existed. Whether or not it survives today is questionable. 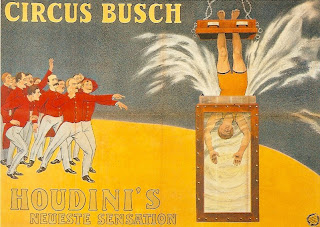 There are a number of Houdini Circus Busch posters. The poster above with Houdini and the German Policeman, seems to have been made in a couple different sizes and the designs are slightly different. The lettering is thicker in some posters than others.  There was also a Houdini-imitator who used the exact same poster but put his own name there instead of Houdini's.

There were several Circus Busch Water Torture Posters. Perhaps there were other posters which have been lost to time, like a Circus Busch Milk Can or Straight Jacket poster. It seems reasonable that Houdini would have these to promote the appearance but none exist today. By the way, there is also a nice photo of Houdini sitting in a car with a crowd of people in front of the Circus Busch.  (Kevin Connolly's site www.HoudiniHimself.com)

In 1937, the Circus Busch building in Berlin was demolished. However,  Circus Busch as a tent show would live on and still exists today. There is a website I stumbled across which has a number of beautiful Circus Busch posters, some of them obviously escape acts. http://raffaelederitis.blogspot.com/search?q=circus+busch


Thanks go out to John Cox of WildaboutHoudini.com for letting me use the Undina and WTC images.
Posted by Carnegie