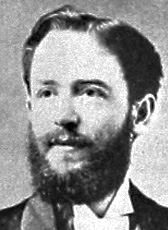 He was born in 1856 to parents who were both devout Spiritualists. His mother, Eleanor, was in fact a practicing medium. He lived a fairly ordinary life, went to college and then got a job. He left that job to work for Anna Eva Fay the famous psychic/medium/mentalist. Before long, Bishop became Fay's manager. But something would happen to change all that. In 1876 an exposure of Anna Eva Fay's act appeared in a newspaper. The information was secretly provided by none other than Washington Irving Bishop. Right after this, Bishop left the employ of Fay and went about presenting his very own 'exposure' show revealing the tricks of Anna Eva Fay and other fake spiritualists. He even went so far as to expose the 'Second Sight' act that Robert Heller the magician had been presenting. Heller by the way, never claimed to be anything other than a musician and a magician.


Around 1877, Bishop's act changed from being an exposure act to one where he did Mind Reading effects. He learned these from another popular mind reader of the time Jacob Randall Brown. The one main effect that he got from Brown was the technique called Muscle Reading. During Muscle Reading the performer can be blindfolded, and while holding the hand of an audience member, is able to locate hidden objects. Bishop built this into quite the phenomenon.

Now fast forward to the night of May 12, 1889. Washington Irving Bishop has been asked to perform before the prestigious Lamb's Club in NYC at 70 West 36th Street New York NY. The Lamb's Club was the first professional theatrical club in America. Over the years some of the famous members have included: John Barrymore, W.C. Fields, Will Rogers, Cecil B. DeMille, George M. Cohan, Fred Astaire, John Phillip Sousa, Cliff Robertson, John Wayne, Charlie Chaplin and many more. Bishop was asked to perform for the top tier of Theatrical Entertainers and he gladly agreed.

He performed a number of unbelievable Mind Reading effects with the use of his muscle reading technique. And then, he collapsed! He fell to the ground unconscious. A friend of Bishop's mentioned that his friend was probably alright. He apparently suffered from catalepsy.   The definition of Catalepsy- noun a physical condition usually associated with catatonic schizophrenia, characterized by suspension of sensation, muscular rigidity, fixity of posture, and often by loss of contact with environment. This was not the first time Bishop passed out during a performance. Because of this he carried a note in his breast pocket explaining the situation and informing whoever found him that under NO circumstances should an autopsy be performed.

Bishop woke up a short time later and actually requested to finish his performance. But before he got too far he was out again. This time however, he did not wake. Attending doctors eventually pronounced him dead in the early morning. Bishop's wife was notified and the following day she came to see her dead husband at the funeral home. When she saw her husbands body she was mortified. An autopsy had been performed! His skull had been cut open and his brain removed. She began yelling "they've killed my husband!!!" It is very likely that Washington Irving Bishop was simply in a cataleptic trance. The doctors who examined him in the early morning said  'no note was found on his body'. Possibly they found the note after they had begun the autopsy. Shocking! 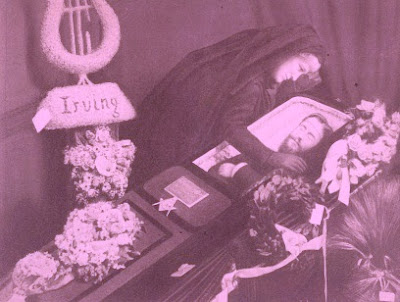 But the story doesn't end there. If the wife was angry, it was nothing compared to Eleanor Bishop, the mother! She wanted answers. Why was an autopsy done? Who stole her son's brain? She asked for an coroners inquiry, so a second autopsy was done. The missing brain was located in the chest cavity of Bishop, but no cause of death could be discovered.  Later she had charges brought against the doctors involved. Unfortunately, they encountered a hung jury and the doctors were all released.

Mrs. Eleanor Bishop was kind of a unique person. She made countless outlandish claims throughout her life. Things like being friends with Abraham Lincoln, Theodore Roosevelt and William McKinley. She claimed she was owed countless millions of dollars and on an on the tales went. Apparently, none other than Harry Houdini came to her aid later in life and he would purchase items from Bishop's collection to help out the mother. When she passed away, Houdini found out he was the sole beneficiary of her $30 million estate (except there was no money to be had).