The history of magic is filled with incredible stories of success and failure, triumph and disaster, luck and misfortune. I love history, period, but especially magic history. This next story is tragic. Those who are knowledgeable in our arts past will no doubt know this story or at least be familiar with it. I had heard about it maybe 15 years ago for the first time. All I knew really was a mighty hero of magic experienced an earth shattering event that killed the magic that once burned bright within him.

It would be good to give you some back story to begin with. Our hero is none other than Jean Henri Servais LeRoy. He was born May 4th, 1865 in Spa Belgium. To give you an idea of the time frame, in America the Civil War had just ended and Abraham Lincoln had been assassinated only weeks before. This young man would grow up to Servais LeRoy and would be part of the troupe known as The Monarchs of Magic. This troupe of performers was LeRoy, his wife Mercedes Talma and a comic character known as Bosco who was played by a number of different performers over the years. 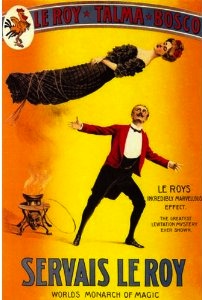 LeRoy had a very devilish appearance on stage. He came out wearing a top hat, a long coat and a cane. First he would cause the cane to vanish, followed by the hat, then his trousers would seem to vanish leaving him with what were called 'knee britches'. He transformed into this mephistophelean like character and at that point the show would begin!

Servais LeRoy is someone that anyone involved in illusion magic should closely study. His inventions and twists on existing effects were incredible. One of his inventions, 'The Asrah Levitation' would change the way illusion magic was done from that time up until today! Some of his other creations included; The Costume Trunk, The Palanquin, The Three Graces, The Red Hat, The Strange Disappearance and many more. Many of his illusions are still presented today though I'd venture to say that most modern illusionists are unaware of who created them.

LeRoy, Talma and Bosco were a hit wherever they went, and they went everywhere! They traveled the world and continued to invent and create and change the show as the years went by. Eventually, time and age caught up with LeRoy and he settled in the town of Keansburg NJ.

On October 19th, 1930, while returning from a trip to NYC, LeRoy was walking across the street and was hit by a car. He was rushed to the hospital with multiple injuries and remained there for nine days.
It's safe to say he was never the same after this. But though this was a terrible occurance, this is not the tragic event that I spoke of at the start. LeRoy eventually recovered and continued to invent and create and occasionally perform.

In 1940, Sam Margules was putting together the annual S.A.M. show and he wanted to really give this show a distinctive stamp. His idea was to let Servais LeRoy (now 75 years old) present his full evening show! Keep in mind, Servais LeRoy was a product of the Victorian Age and his style of dress and presentation were ideal for his time. But now it's 1940 and he has to perform for people accustomed to movies, radio a much faster pace of life.

On June 6th, 1940 the show billed as "NEVER BEFORE SUCH A MAGIC SHOW" would take place at the Heckscher Theatre in NYC. Servais LeRoy would perform his full evening show for the first time in years. However, his trusted assistants who had been with him throughout his life would not be part of the show. Instead, LeRoy 'trained' a new set of assistants. Actually, he only had a single rehearsal with the new crew and he seemed unsure what to do many times during the rehearsal.

The evening of the show the curtain was almost an hour late to open because LeRoy knew full well he was in no condition to do the show. But somehow he summoned up the courage and walked out on stage. The seventy five year old veteran of thousands of shows suddenly found himself in unfamiliar territory. He struggled from the moment he went out on stage. Worse yet, the assistants who had barely one rehearsal, could not follow along with what LeRoy wanted or expected them to do. It was a train wreck and the only thing that stopped it was an intermission.

As you might imagine, a great deal of the audience got up and left during the very long intermission. I can't even begin to imagine the feelings they must have felt. Here was this icon of magic, one of the real greats who was unraveling before their eyes. Then again, some of them may have been unfamiliar with LeRoy and were just angry at seeing such a terrible magic show. Sadly, Servais LeRoy returned to do the second half of the show and it was worse than the first. Sam Margules, the producer of the show eventually stepped in and drew the curtain on LeRoy. The show was stopped before LeRoy was finished, but it truly was over before it began.

That singular night killed the magic that lived in Servais LeRoy's heart. He would never again perform or step onto a stage. A career filled with triumph and success ended in excruciating humiliation. He was now a broken and defeated man.

The first time I read the full account of the event, I had tears in my eyes and my heart ached for a performer who I never knew in person. I tried to imagine the heartache that he must have felt, but what I imagined probably paled in comparison to what LeRoy felt.

In the book "Servais LeRoy-Monarch of Mystery" by Mike Caveney and William Rauscher there is a much more detailed description of the evening. The book is out of print but shows up from time to time on eBay. Find a copy if you can it's worth it, though you too may find  yourself in tears over the sad ending of such a beloved performer.

Today LeRoy is mostly forgotten. Yet performers are still doing his tricks. The recent appearance of Ali Cook on "Penn and Tellers FOOL US" is a perfect example. The trick where the heads of a chicken and a duck are removed and then switched so that the duck has a chicken head and the chicken has a ducks head is right out of Servais LeRoy's act. Though it was David Copperfield who first brought it back to modern audiences in the 1980s (this link has the routine at 5:17). Anyone doing 'Things That Go Bump In The Night' is really presenting LeRoy's Three Graces Illusion. And any illusionist using the 'asrah furniture' owes a debt of thanks to Servais LeRoy.

That night at the Heckscher Theatre in NY is a heart wrenching story. There may only be a handful of people still alive who saw the show. Most would probably rather forget it, including Sam Margules who never even wrote about it but chose to forget it ever took place. It's sad but it's part of our magic history now.
Posted by Carnegie