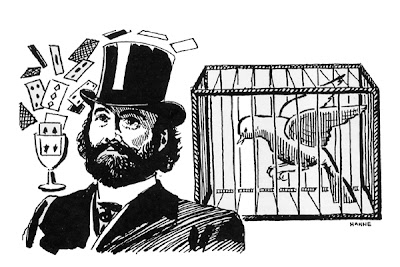 La Cage Volente, La Cage Eclipse, The Flying Cage or as we know it today, The Vanishing Birdcage was the invention of one man Joseph Buatier. In 1873 French magician Buatier (who would later add deKolta to his name and become Buatier DeKolta) created the first hand held cage that could vanish. The first model, possibly a prototype was made of highly polished wood. The bars were possibly string or elastic. It appears the original shape of the cage was square or rectangular but at some point he created a longer cylindrical cage with a round top and bottom.

The Vanishing Birdcage was a sensation and was also quickly ripped off. In the Summer of 1875 Harry Kellar is said to have purchased a cage from DeKolta's cousin for $750. Of course this was unauthorized because Buatier never sold cages to anyone.  This cage was probably the very first one outside of DeKolta's act, but it wouldn't be the last. In fact, Harry Kellar can probably be credited for the deluge of Vanishing Birdcages in America because he sold the secret to a magic dealer in exchange for props. In Europe a letter from Robert Heller to Charles DeVere the french magic dealer shows that the cages were already for sale in December 1875.

Harry Kellar stirred up a bit of controversy while in Australia over his presentation of "The Flying Cage" as he called it. Harry Kellar's routine was simple and direct, he counted to three and the cage with a live canary inside would vanish! A rumor circulated that Kellar was killing a canary every time he presented the effect. An inquiry took place and Kellar proved that was not the case. He showed that he had one bird and one bird only that he had been using for a long while. But this same controversy would come to haunt other magicians across the globe. In fact, this controversy was used as a minor plot point in the movie "The Prestige" in which they give a rather fictitious explanation on how the cage works.

A description of the DeKolta's routine says that he made the cage vanish with a tossing motion. Then he would remove his jacket so that the audience could examine it. After putting the jacket back on DeKolta would make the cage reappear once again.

Harry Blackstone Sr and Jr. used the idea of repeating the effect successfully. After making the cage vanish once, Blackstone would walk offstage to get a second cage and this time invite children up to place their hands on the cage. While attempting to cover the cage with their hands the vanish would occur and their hands would all collapse together.


John Booth had an interesting twist. His cage is what we call a Blackstone cage, meaning it had red ribbon around the outer edges of the cage. He had a second cage with green ribbon so that when he would repeat the trick, it was clear that he wasn't using the same cage but instead a different one.

But my favorite routine comes from Servais LeRoy. He had been doing the cage vanish for years and according to the book "The Elusive Canary" by Mystic Craig,  Servais LeRoy was the first to do the 'repeat' of the vanish with a member of the audience putting their hands upon the cage.  After the cage vanished LeRoy would have the spectators check to see if the cage was on his body. So Blackstone's routine seems to have been inspired by Servais LeRoy.

In 1933 the Camel Cigarette Company 'exposed' the trick in a marketing campaign they called "It's Fun To Be Fooled". Not to be outdone, Servais LeRoy altered his routine. He would stand on a raised platform and had two spectators on stage with him. He would make the cage vanish and then immediately began to disrobe. He took of all of his clothes except for his under garments! He stood on stage in his underwear while the audience checked out his clothes for any sign of the cage. What a sight that must have been, amazing and hysterical.

It's still a wonderful effect today just as it was back in 1873 when Joseph Buatier invented it.
Now just as a treat, I have one more video, but you'll need to move up to 16:30 on the video to see the Vanishing Cage routine. This is the late Billy McComb who does a comedy version and does it in slow motion. Enjoy!