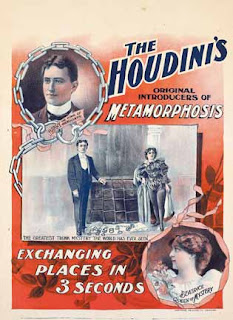 The Metamorphosis: Here was a trick trunk invented my John Nevil Maskelyne. But Houdini did something with it that made it far more amazing than any performer before him. He added the element of speed. Even in his advertisements it says "Exchanging Places In Three Seconds". Plus in Houdini's hands this effect was truly impossible. First his hands were tied behind his back, then placed a sack was lifted over his head and tied shut, then he was put in a trunk and locked and roped that shut. It seemed totally impossible, yet three seconds later there he was and Bess was gone. She ended up in the exact position he had been in, tied up inside the sack, inside the trunk. He made that trick his own and no one today calls it the Maskelyne Trunk trick, it's always associated with Houdini.

Interestingly, the next couple to modernize the Metamorphosis, were the Pendragons. How exactly did they make it more modern? They did the same thing Houdini did and made it even faster!

The East Indian Needle Trick: Here is a small trick that takes guts to do. Forget about jumping off bridges handcuffed, in this you've got to put needles into your MOUTH! Of course, after Houdini apparently swallows the needles, he also swallows some thread. Moments later the thread is pulled from the mouth and there threaded on the thread are the previously swallowed needles. Houdini didn't invent this one either but he sure made it his own. In fact, he apparently either patented or copyrighted the routine thus preventing others from performing it. This fact was brought up to Long Tack Sam, by Houdini when Sam wanted to do the trick which he had performed many times before. Houdini stopped his competition cold on this one.

One of the best Needle stories I've ever read comes from the book "Illusion Show" by FuManchu/David Bamberg. When David was a young boy he would often play at the Houdini's house on 278 W 113th St. in NYC. One day while playing or snooping around as it were, he discovered a packet of needles and the secret to the trick. He never told Houdini that he found them, but always remembered that moment. Fast forward a couple years and Bamberg is about to join a Magic Club (I forget exactly where, I don't have the book handy) and he decides he'll do the Needle Trick as his initiation trick. As he is getting ready he hears Houdini coming in. Holy crap! What is David Bamberg to do??? You can just imagine the thoughts going through his head. Well, Houdini heads straight for the Great Raymond, the Illusionist and the two of them get into a huge argument that broke into a fistfight. Fortunately, the two resolve their issues and everyone forgets about David's initiation, so he is off the hook! Funny Stuff. 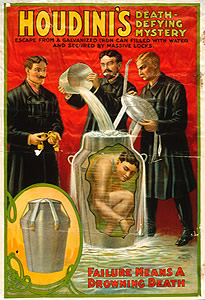 Next we have The Milk Can Escape. This is a Houdini original, though according to the Patrick Culliton Book "Houdini-The Key" the method was invented by someone else. In 1908 Houdini was having trouble selling his Handcuff Challenge Act. All the bookers 'had seen it' or seen someone else do it. It had also been exposed in the papers. So in St. Louis Houdini debuted his latest sensation with the tag line "Failure Means A Drowing Death". The escape was promoted with a slightly deceiving poster. The locks were not down on the body of the can but on the neck. Still, that hardly mattered, the dramatic routine that Houdini presented captivated his audiences. He always escaped (and probably much sooner than most of the audience realized).

The video link above is of Dean Gunnerson the escape artist presenting the Milk Can. The actual escape begins about 2 minutes in to the video.

These are just a three of Houdini's feats. Given the fact that they are still staples of modern day performers acts, I'd say Houdini' magic was rather strong. And there is more to come...