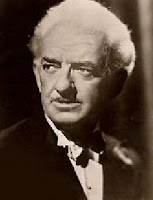 Here's a slight change of pace from all the Houdini stuff. Did you know that Harry Blackstone Sr. is in the Smithsonian Museum? Back in the 1985 Harry Blackstone Jr. donated two original pieces of his father's equipment to the museum. Apparently it was the first time they accepted a magic donation. I find that somewhat hard to believe because I'm sure there are Houdini items in the Smithsonian.

But it is still quite exciting for Blackstone to be in the museum. Now whether or not they are on display, that I cannot say. The two items in question are one of the original Dancing Handkerchief Casadega Cabinets and the original Floating Lightbulb apparently built by none other than Thomas Edision!
Posted by Carnegie