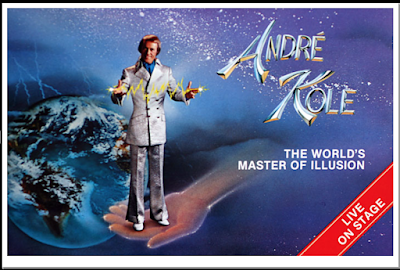 Robert Gurtler Jr., known professionally as Andre Kole has passed away. He died October 17th, 2022. There was a time when if you wanted to find the best new illusions for your show, you went to Andre Kole because he had all the latest and best creations. He supplied illusions to Doug Henning, David Copperfield, Siegried and Roy and more. On his own, he was a Christian Illusionist, touring on behalf of Campus Crusade for Christ. He would go to church and theaters and other venues with his show.

Andre's performance was split into two parts. The first part was pure magic and fun. Looking back, I think everything in his show was his own creation and WOW, were there ever some amazing pieces. He created a portable version of Vanishing The Statue of Liberty. His statue was about 8ft tall and vanished from the bottom up!!! He created a clever piece called No Feet, where he would step into a 4 sided box, lift it up to show both is feet and legs. And then one by one they'd vanish. In other words, both feet/legs would be there, next one foot and leg was there, the other was not. And then amazingly, the one that had vanished would return and the other leg/foot would vanish! Of course the audience laughed. Then he would lift the box again and sure enough, both feet and legs were gone!!!! That particular illusion was featured by Doug Henning for years. One of David Copperfield's favorite illusions and one he still does today was created by Andre Kole called The Squeezebox, it's a shrinking man illusion and quite visually deceptive!

The second half of Andre's show was his Christian Ministry Magic. He would use a couple magic tricks to illustrate parts of the gospel and the teachings of Jesus and then in coordination with a local church or churches, would do a prayer. The churches were there to help any new believers on the road to Christianity. He always gave folks a chance to step out if they were not interested in hearing the message. In that way you could never accuse him of forcing a message on you that you might now want to hear. I saw the show many times. I never recall anyone ever leaving.

Andre had been retired from the stage for a number of years, and recently, David Sandy & Lance Rich purchased Andre Kole's show, or a least a great deal of the illusions.

I understand Andre had been suffering from alzheimer's. He died at home in his sleep on Monday Oct 17th 2022.