The RETURN of The Magic Detective 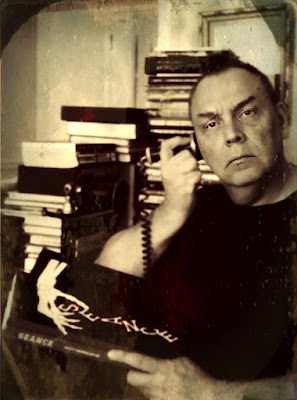 Well, that headline is a bit deceiving. I am not really returning, as I had never left. But it has been some time since a post or podcast appeared. Life and career seem to get in the way of the Magic Detective activities. Still if you were here in my house, you would think otherwise.

There are 350 books sitting on my desk. About 20 books on the coffee table. 3 books next to my recliner. 5 books next to my bed. The only room that doesn't have books is the kitchen. But the dining room table is also covered in magic books. And the reason for all of these various piles of books, is that every time I sit down, I begin to research something. But as I said, I've also been preoccupied with work. I just came back from performing as The Steampunk Illusionist for a festival in Hannibal MO. I've been working diligently on a new version of my show ASTONIFY, which is a magic show and seance presented virtually. And then I began getting inquiries for Halloween, so I just booked a big gig for the daytime on Halloween, and yet I'm doing Astonify at night. And it looks like the entire week before Halloween is going to be booked. All of those are magic gigs. It leave little time for the Magic Detective. 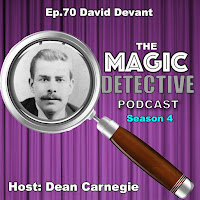 But fear not! Here is what I'm doing in regards to the podcast. Because I had such trouble keeping consistent with the podcast during Season 3, I'm just starting Season 4 in October. I will begin with Episode 70 covering the life of David Devant. I had so much research material on Devant, that the task became overwhelming. You'd think it would be easier when you have a lot to choose from, but the truth is, I have to constantly remind myself that I'm doing a 30 minute podcast and not writing a novel. I get carried away in the research at times. But I know you'll totally enjoy episode 70 when it comes out.  Later in the month I expect to have at least one Houdini episode and with any luck a third podcast, yet to be decided.

The blog will feature the transcripts as well as any video that I might do.........and expect to see VIDEO in the coming months!

IF you are a reader of my blog or listener of the podcast, please JOIN the Facebook Group page at:

Email ThisBlogThis!Share to TwitterShare to FacebookShare to Pinterest
Labels: The Magic Detective