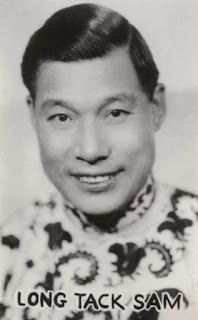 Long Tack Sam was born September 16, 1884 in Northern China. He was born the son of an Imperial Officer in the service of the Emperor (1).

There are conflicting reports of his childhood, so it's hard to know which one is true. One version of the story has a young Sam apprenticing with a Chinese Magician named Wang for six years. After that period of time, Sam had learned two tricks, the Linking Rings and the Rice Bowls. He left there and went out to work as a magician in Shanghai where we eventually joined another performing troupe. Another version of his earlier years has Sam being trained in acrobatic techniques by his brother and Sam eventually running away from home.

Whatever the case, he eventually left China working with a western circus. In time he would become part of The Tan Kwai Troupe and Sam became the director. Later the name would change to ‘The Royal Pekinese Troupe’ but that name was problematic because bookers thought it was a ‘dog act.’ The name of the show would change several times until he finally decided to use Long Tack Sam. Apparently his real name was Lung Te Shan or possibly Lu Te Shen. But he chose Long Tack Sam as his stage name & for his troupe.

His performing troupe was made up of acrobats, jugglers, dancers and he did the magic and also comedy. By all accounts he was a marvelous impressionist and mimic and could apparently copy the dialects of many languages including: Yiddish, French, Italian, German, American, Australian and probably more.

The magic that Sam included in the show consisted of the Burnt & Restored Turban, the Linking Rings, The Needle Swallowing Feat and Rice Bowls. But his stand out trick was one that other 'asian acts' had presented, but not in the dramatic fashion that Sam did. This description is from MAGIC: A Pictorial History of Conjurers in the Theatre by David Price, "Long introduced his amazing bowl production. The trick was performed as part of a flip, sometimes called a somersault in the air, and was performed without touching the hands to the floor. After the flip, he had the bowl of water with fish in his hands".

This bowl production trick was the creation of another Chinese Magician and really the first one on the scene, Ching Ling Foo. But other magicians copied the act, some using a stack of bowls instead of one large bowl. No one however did what Sam did.

Again from the book MAGIC by David Price we find this: “In the Long Tack Sam show, each trick, magical or otherwise, was preceded by the sounding of a gong. In the bowl production, six acrobats would perform the flip when the gong was sounded. The Long Tack Sam performed the flip alone, at the conclusion of which it was seen that he was holding a large fishbowl with live goldfish swimming about.”

Houdini invited Long Tack Sam to be a member of the Magician’s Club in England. Houdini was President and I believe Will Goldston was Vice President. Sometime later upon his return to the US. Houdini apparently patented or copyrighted the Needle Trick, thus stopping everyone else from performing it.

The Needle Trick had been a staple of Long Tack Sam’s show for years, even before he knew Houdini, and now he was restricted from performing it. (2)

There is a fun story from the biography of David Bamberg, ILLUSION SHOW. He tells a story of a Chinese man coming up to him after his show. The man first asks if he speaks English? And then he goes on to say that a lot of the material in the show appears to be copies of the tricks of the famed OKITO. Then he says, even your colorful banner, which has your name but OKITOS face….He says that though you are very talented, this is the wrong approach. And David Bamberg replies that he agrees for the most part, except the banner was a gift from OKITO and as for the tricks, his father gave him permission to use them. Long Tack Sam, seeming somewhat confused says, “Your father?”. And David says, “Yes, I am David Bamberg and OKITO is my father” And the two men have a hardy laugh. What I love about the story is the ending. The two men, after proper introductions, talked magic and magicians and then Sam spotted David’s Linking Rings. He asked to borrow them and then proceeded to show David Bamberg the most incredible routine with the Linking Rings. He was stunned!

On Sam's first visit to the U.S. his troupe got to open for the Marx Brothers at the Palace Theatre in NYC. Prior to coming to America, Sam had married a woman named Leapoldi or Poldi, from Austria. And he would soon start a family. As WW1 broke out all over Europe, it made travel to Austria impossible. It also made it impossible for his wife and daughters to come to America.

Sam had two daughters, Mina and Nepoldini, who eventually become part of his act in the later years. They went by the stage names Meena and Neesa. Neesa had a special gift of playing the violin that was incorporated into the show. Daughter Meena danced in the show and assisted Sam during his presentation of the Doll's House Illusion where she magically appears from a tiny Doll's House. In 1932, Sam and his daughters performed at the now famous Grauman's Chinese Theatre in Hollywood California.

It’s said that during his career Sam would open bank accounts in a host of different countries. He figured, if something terrible happened anywhere in the world, he would have sufficient funds to carry on. (3)

Sam apparently had a favorite story he would share about a piece of property he owned in Shanghai. It was a theater, and one day he was standing in front of the theater when a Soldier appeared out of no where. The soldier asked Sam, “WHERE IS THE OWNER?”  Sam told him, “UPSTAIRS!”. As the soldier went upstairs to find the owner, Sam ran in the opposite direction and fled the country abandoning his property. (4)

Long Tack Sam and his troupe were extremely successful and quite popular in America, Australia and China. Sam even invested in theatre property in China and two restaurants in London. Eventually, as age creeped up and life on the road got to be too much, Long Tack Sam retired from show business. The first time he was coaxed out of retirement was in 1940 when he performed at the Majestic Theater in Shanghai. Was this the theater he left behind during the earlier Japanese Invasion? We do not know.  He was talked into coming out of retirement by Herman Hanson in 1952 to appear at the Society of American Magicians Convention in Boston. He was on the bill with Frances Ireland, Silent Mora, Dr, Jaks, Jay Marshall and more. . He performed his fish bowl production and gave a lecture at the conference as well. Silent Mora was present at that lecture and said that he was even more astounding during his lecture than his Friday night performance. And it should be noted his Friday night performance brought the house down! (5)

And a few years later in 1958 he did return to the stage for one last benefit show for the Society of American Magicians in NYC. Sam was the Masters of Ceramonies, he was 73 at the time. A few years later, Sam and Poldi were in a car accident. They moved back to Austria to rest and heal. But rather than heal, Sam had more health issues. He died in Linz Austria on August 7, 1961. He and Poldi are both buried there in Linz.

Just to put Long Tack Sam into perspective, Orsen Welles considered Sam one of his mentors. Sam was friends with Dai Vernon, Max Malini, Nate Leipsig, Silent Mora, Houdini and basically all the popular magicians of his time. The legendary comedian George Burns said of Long Tack Sam, "The Greatest Vaudeville Act I'd ever seen."

Finally, the DVD documentary The Magical Life of Long Tack Sam is a must watch. It's produced, directed, narrated 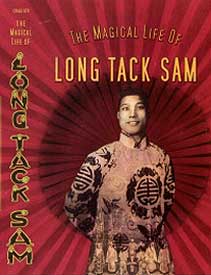 and stars his great granddaughter Ann Marie Fleming. It is so rich with magic history and yet tells a wonderful story of her family ancestry and contains some elements that are heart breaking and some very joyous moments as well. It's amazing that Ms. Fleming made the documentary when she did because all of the magic people interviewed in the film: John Booth, Elaine Lund, Jay Marshall and Jackie Flosso are all now gone.

BTW, Ann Marie mentions something in the documentary that I am familiar with. She ponders the notion of why his family had forgotten about him, why he was forgotten by the public, whether it was a cultural thing, or what exactly it was. I can’t answer the WHY, but I can tell you the exact same thing happened in my own family. My parents knew nothing about their great grandparents, nothing was ever said. It was a big mystery. And then I began to research the ancestry and found there was a huge side of my family that no one knew existed! It’s as if families just move on, live THEIR lives and don’t look much at the past. I think it was likely the same with Sam and his descendants. Then it takes someone willing to dig, to discover what mysteries were left behind.

For those interested in seeing the documentary, I will put a link in the podcast Episode description.

To hear the podcast https://magicdetectivepodcast.com/e/ep-68-the-world-renown-long-tack-sam/

HOW to see the film

3.   The Illustrated History of Magic by Milbourne Christopher

Parts of this article appeared in a previous blog post from 2012.