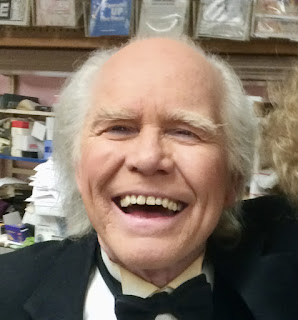 Denny Haney
Denny Haney was a magician and a magic shop owner.  But to those of us who knew him, he was much more, he was our teacher, our mentor, our professor of magic.  He was never a household name, but he was extremely successful . That man should have been a world famous magician, and frankly to us, he was. To us, he was the King. He had done it all and done it well. He had met the greats in magic and in show business and they respected and revered him. It didn't matter to Denny if you were famous or not, he still treated you the same. If you had a desire to learn magic, he was going to take you under his wing and show you the right way to go about it. This book is about the life of an amazing man. Over a lifetime he encounters some interesting people whose stories are also shared in this huge volume. There is enough biographical background information on various people to make this book a very very important part of magic history, beyond just the Denny story.

Scott Alexander was a student of Dennys. As were so many of us. But Scott was tasked with finishing the Denny Haney book. Titled: Denny Haney Collected Wisdom, it is a large book of some 486 pages. The first part is a biography of Denny's life. There are a total of 5 parts to the book and I'll get into them more in a bit.

I knew Denny Haney. When he had his first shop in Essex MD, I would go to the shop often, hang out until everyone else had gone and then stay until the wee hours of the night talking magic with Denny. Usually, it began with a single question and then Denny would speak and I would shut my mouth and take in all the knowledge he shared. I learned so much from that man. Starting to read this book was difficult for me because, well, Scott Alexander has done a near perfect job. So many of the stories in this book I have heard before because Denny shared them with me at one time. One after another after another. It is as if he is speaking to me as I read this. I can hear his voice!  And then a moment will come and I remember, I remember, I'm reading this book because he is gone. If you knew Denny, you'll experience this as well.

I sat in my chair for a good 30 minutes trying to contain myself enough to read the book. I cannot even imagine how Scott did this. He was extremely close to Denny, far closer than I was, far closer than most. My hat goes off to him for this incredible job. For the record, the book arrived yesterday, I've read half of it already. I'm only writing this first part of the review, because I want to get it out while it's fresh in my mind. I will read till the end before I finish this review. Just realize, there will be a bit of time between these above paragraphs and those below. 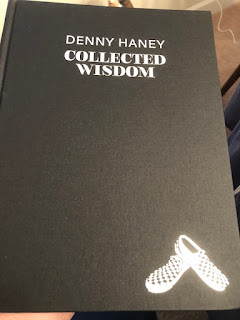 Part 1 The Biography. The stories and content are brought to you by both Scott Alexander and Denny. All of Denny's contributions are in italics. Here you'll learn how Denny got started in magic, who his early influences were. You'll discover who the red-headed demon was. There is so much magic history in this part. You learn about the magic scene in and around Baltimore in the 50s & 60s, right off the bat.

One thing that really astonished me was that Denny loved to play the piano. He was apparently a gifted musician as well as magician. He could play guitar as well. Though in later life as magic took over, music was left behind.

Denny was drafted into the military to fight in Vietnam. If you knew Denny, you knew about his time in Vietnam to some degree. What I didn't know was Denny actually had an out. He was 4-f. But he didn't like the idea of there being something he couldn't do. So he asked the doctors how he could beat the test and he did. He was chosen because of his linguistic abilities, it was determined he had the aptitude to pick up languages easily. He had to learn North Vietnamese. He learned from Harry Blackstone Sr. who, apparently was in the same program, that if you were in this part of the military you didn't have to see combat. Denny was fine with that, until the day came when he got his papers to go overseas to Vietnam (they lied). And again, he was given an out, a way to stay in the states. And again, he passed on it.

The chapter on his time in Vietnam is remarkable. I knew many of the stories but there were a few that were new to me. But they are a must read. You'll look about Johnny Aladdin, the guy who taught Denny about confidence on stage. And you'll discover where the Lee from Denny and Lee came from.

As each chapter moves forward, you see the voraciousness of Denny to become a great magician. His whole focus is on his love of magic and creating a great act. He had so many mentors along the way. Denny was mainly interested in stage magic and had no interest in close-up. You'll learn what changed his mind on that. You'll read about the Chavez School and his passion for manipulation.

The lessons he learned are just as valuable today to a performer as they were to Denny when he learned them. Doug Henning shows up in a chapter. I remember having many talks with Denny about Henning. None of that is in the book, but what is in there is revealing on a different level.

You're going to learn a lot of things about Denny. He was not perfect, he was a flawed human being, like the rest of us. But he had a passion for magic that was extraordinary. I'm not going to give you a play by play of the bio, you need to read it. It's worth every moment.

Here we get into the magic that Denny performed. These are Denny's touches on many classics, his ways of doing things, his methods, his bits. Read the chapter on The Egg Bag. You'll learn a great deal. I was happy to read that Denny disagreed with both Johnny Thompson and Charlie Miller on one aspect of their Egg Bag routines. They both came out and made note of the fact that they were using a blown egg or an egg with no insides. I too felt this was a mistake when I first heard that, and I was on the same page as Denny.  That's the only issue with Johnny and Charlie everything else, was spot on. And you'll read WHY Denny thought mentioning the blown egg was a mistake.

There are many classic Denny routines in this mix. They truly did cover everything he presented over the years that had that special Denny mark to it. Denny's clever take on the Newspaper Tear, his Card Manipulation routine, The Multiplying Bottles, The Razorblades, and much more. All routines have Denny's history with them, and his approach to each routine. Please do yourself a favor. At the end of this review is a video of Denny performing. You'll actually get to see several routines that are covered in this part of the book. Listen to the audience. Watch how he connects.

The illusions are featured in this section. The Crystal Casket, The Hindu Basket, The Sword Suspension, The Canvas Covered Box, and finally the Blade Box. I saw Denny perform all of these, except for the Blade Box. But it is the Blade Box that connects Denny and I. One day I will share that story, but not today.

I couldn't wait to read this section, though I have a feeling many folks will just gloss over it. This part is filled with incredible knowledge. I wish there had been more as I know Denny had many strong opinions when it came to illusion presentation. But this chapter perfectly covered those routines that Denny used in his career.

The Specialties. These are routines that in Denny's hands were as close to perfect as one could get. It begins with his Billiard Ball routine. His take on the Lloyd Manipulation Candles, Denny's Dancing Cane Finale, and then some routines not for the faint of heart, which you'll understand my meaning when you get there, lol.

As I mentioned earlier the book is nearly 500 pages. It's HEAVY and large in size. It's not politically correct, because that is the way Denny wanted it. And I for one would not want a watered down version of Denny. I heard his voice while reading the majority of this book. The only thing I can say is, when I finished the last page...I wanted more. Not because anything was left out, but because, just like it was when hanging out with Denny, you never knew when he was going to hit you with some piece of knowledge that could change the whole direction of your career, or at least, how you approached a routine in your show.

As is pointed out in the book, Denny didn't open a magic shop to become wealthy. He opened a magic shop in order to leave behind a legacy of performers, who he touched, instructed, advised, and advanced magic forward. He did one hell of a job. Thank you Denny Haney for everything you did for me. Thank you Scott Alexander for this fantastic tribute to this wonderful man.

To get your copy of the book: https://scottalexander.bigcartel.com/product/the-denny-book

WATCH Denny in Action at the Magic Castle