I was curious as to where Houdini stayed when he was in Washington D.C. and I discovered rather quickly that one of the places was the Willard Hotel. The Willard is a DC landmark and has had many famous guests over it's very long life. Interestingly there is a plaque on the side of the building listing some of it's famous guests, Houdini's name is missing from the list. Yet I have no clue who a number of the people listed are. But on the Willards website they do list Houdini as a guest, as do a number of other sites related to the Willard. 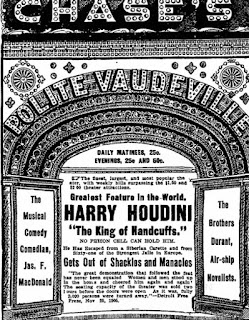 Houdini and Bess also stayed at The Hotel Washington on 15th St. That hotel recently became the 'W' Hotel. It is a few doors down from Keith's Vaudeville Theatre (15th and G St), where Houdini often performed and where he did one of his upside down straight jacket escapes in Washington D.C. On Jan 12th 1922, Houdini hung upside down in a straightjacket in front of Keith's. This is an iconic photo in the history of Houdini as it often shows the Treasury building across the street and some photos even catch a glimpse of the Washington Monument in the distance.

The old Munsey Building where in April 1916 Houdini did his first upside down straight jacket escape is not far from this, also on Pennsylvania Ave. and that location today is a Marriott Hotel, but Houdini did not stay there as it wasn't around at the time.

There were likely more hotels that the Houdinis stayed in as he performed in DC a lot during his career. But much has changed in DC, the majority of the theaters that existed at the turn of the century are gone. Keith's was demolished in the 1980s. The Gayety Theatre on 9th St. where Houdini performed in 1912 is also long gone. Even the Old DC Jail where Houdini did his famous escape from the cell belonging to Garfield's Assassin is also long gone. And that brings us back to the Willard because Houdini was performing at Chase's in 1906 when he did the jail escape so he likely was staying at The New Willard.

(This originally appeared in Nov 2010 on my blog. Some of the information was incorrect, so I have updated it and republished it nearly 10 years later, with accurate info!)
Posted by Carnegie