The Illusions of Chevalier Ernest Thorn 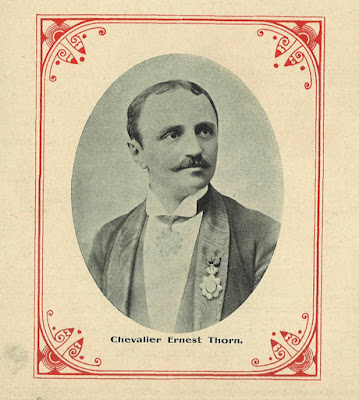 Episode 41 of The Magic Detective podcast was on the life of Chevalier Ernest Thorn. If you've listened to the podcast, you'll be aware that I was unfamiliar with Thorn, prior to working on the episode. Now that I've finished my research, it seems, well, my research has just begun. Let me explain...

Thorn was an incredible inventor of illusions as well as being a performer. I have not been able to track down everything he did. In truth, I only have a few of this illusions figured out....by that I mean, I figured out what they are. The names of his illusions are listed in numerous biographical articles, but exactly what the illusions did, that's another story. I'm going to list the few that I know. Keep in mind, these are the same ones from the podcast episode, but here you'll be able to see pictures of them rather than just hear about them. 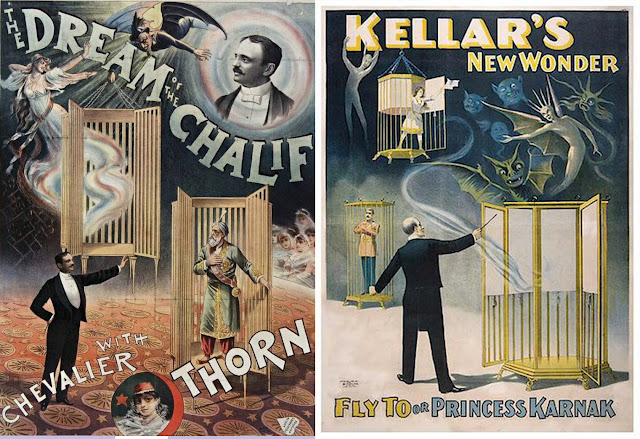 I'll begin with one of his first illusions. The poster for this came out in 1894, so it's assumed the illusion began around that time. It was called, The Dream of the Chalif. I believe Thorn altered the name of this illusion over time to the Chalif of Bagdad. As has been mentioned before, the illusion was pretty much stolen by Charles Morritt and put out as FLYTO. The main change being that Morritt's cabinets were 6 sides rather than 4 sides, otherwise it's essentially the same illusion. I've put the original Thorn poster next to a poster of Kellar's so you can compare the two. 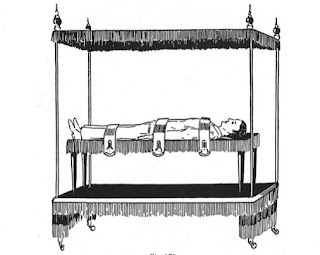 Next we have an interesting illusion that he called The Fakir of Travancore, or The Mystery of Travancore. This illustration comes from the pages of Ottokar Fischer's Illustrated Magic.
I knew I had seen it before, but try as I might I couldn't find the picture. Thankfully, I rediscovered the image in Illustrated Magic, and along with the picture came this explanation of the effect. By the way, Fischer says the effect was known as "1-2-3", but as we know, it was originally called The Fakir of Travancore by it's creator, Thorn.
“Among the transformation illusions is the one produced under the title of “One-Two-Three!” The proceeding is as follows: One of the performer’s assistants is laid on a sort of flat bench, and fastened to it with straps whose ends are secured by padlocks which the spectators themselves may lock. The bench with the man fastened to is is now lifted on to a platform about eighteen inches high, underneath which there is an unobstructed view. A curtain surrounding the platform is let down for a period of three seconds, while the conjurer counts, “one-two-three”. When the curtain goes up, the male assistant has disappeared from under the straps, and in his place is a girl. In order to release the girl, the padlocks must be opened and the straps unbuckled, which requires several minutes. The male assistant vanished without leaving a trace.”  And as I said on the podcast, it sounds very much like a horizontal version of Harbin's Assistant's Revenge, the big difference was the Harbin's illusion involved the exchange of two people, where as Travancore was the transformation of one person into another. I think it's possible that The Fakir of Travancore illusion was the inspiration for Harbin's Assistants Revenge. 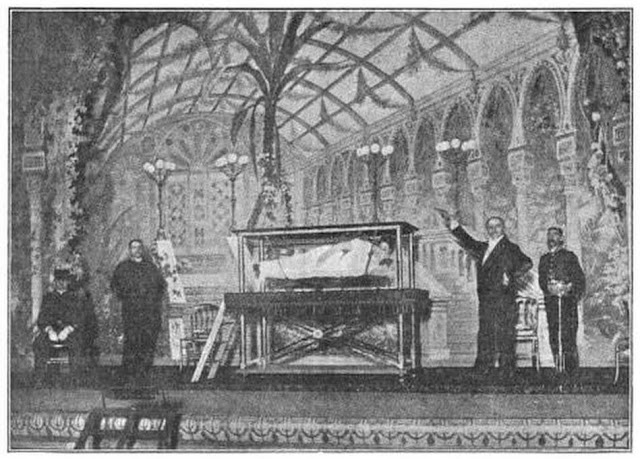 The next illusion is called simply ATTAVAR and it looks similar to the Fakir of Travancore, but it is very different. What we have here is a large table, with a somewhat smaller table on top. Suspended underneath the smaller table is a hammock which has a girl reclining in it. According to the description: “The effect of which is the instantaneous disapparenace of a lady suspended in a hammock from a table. The table, hammock, and the lady vanish together in full view of the audience. The illusion does not depend upon the use of mirrors, cabinets, glass, traps in the stage, or back curtains."  What I can tell by the photo, is that Thorn fires a pistol to make the magic happen. It's possible there was a flash of smoke, or even a small fabric covering that happened just before the vanish, OR it's also possible that the sound of the gun fire was enough to allow the vanish to happen. This was apparently the joint creation of Thorn and Tommy Downs. T.Nelson Downs tried to include it in his show for a time, but audiences didn't take to him doing illusions as they did to Thorn.

Now we come to The Sarcophagus. This was one of the easiest illusions to identify because the design on the front of the illusion has been used by many modern performers. It is known as The Mummy Case, and is featured in the book, The Great Illusions of Magic by Byron Wells.

The basic effect is this: There is an upright Sarcophogus that is center stage. The front door is opened revealing a second door inside. This door is opened revealing the contents of the cabinet. There is a small mummy like figure which is clearly NOT a human being wrapped in cloth, but only meant to represent such. The mummy is removed and now the back door of the cabinet is opened so that the cabinet can be seen to be completely empty. Next the mummy is returned to the inner chamber, the doors closed and the traditional turning of the cabinet is done. When the doors are reopened, out walks an Egyptian princess.

It's a great illusion and the method for which has been used in a couple other illusions that come to mind. I believe Paul Osbourne in his many illusion plans books, had a version with a GrandFather Clock instead of a sarcophagus. I've also seen some images online of versions that are just plain cabinets. Somehow I think the illusion looses it's appeal as a plain box. Though, in truth, even though Thorn's outer graphic has been used many times since, I think a better design is needed.

This next illusion was not part of the podcast because I just now stumbled upon it. The illusion was called "TOIZA WONNDA". This is apparently a Japanese phrase meaning 'Escape & Perish'. I believe this was mistakenly referred to as a 'Chinese Mystery' in Thorn's advertisements. But the effect, was a 'X' shaped torture device that an assistant would be tied or chained to. And next to them was an executioner cutting of the heads of victims. This is my sketchy guess on what this illusion is based on an image from one of his posters and now discovering what Toiza Wonnda actually means. I'm pretty sure I'm on the right track. I am wondering also if the X shaped torture device was some adaptation of the Strobieka illusion. There may have been another torture device where a person is suspended by their feet and there body is tied up. Eventually, I will find out more about this mystery, but I'm pleased to have figured out this much. 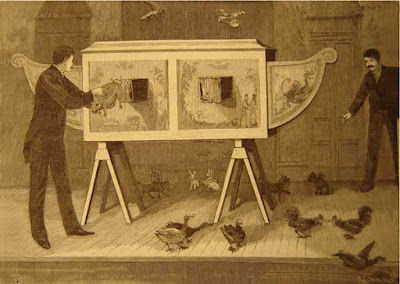 The final Thorn illusion for this article will be his most famous perhaps and that is The Noah's Ark Illusion. This is another illusion that I believe he created in the 1890s. It begins with opening the big front door and back door of the cabinet to show it completely empty. Then after closing it, several buckets of water were poured into the 'ark' from the top. Then, by reaching into the small curtained windows, animals of all sorts were produced, chickens, ducks, geese, rabbits, baby pigs, etc, all came out from the ark. Then finally, when one would think nothing else could come out, Noah's wife was produced from the ark. I love this!!!! What a fantastically themed illusion. Forget about the religious connotations and just embrace the theme, you've got an ark-like structure that you produce all these animals from, and then finally Noah's wife. It's a great mystery and one you don't see today. However, I do know of likely the last artists to feature this and that was the LeGrand David Company out of Beverly Mass. They hand built and hand painted what is likely the most beautiful Noah's Ark Illusion to ever exist. I so wanted this when it went to auction but I was holding out for other things and missed it. IF you know who has it, let me know as I may still be interested. Below is a picture of their Noah's Art Illusion. 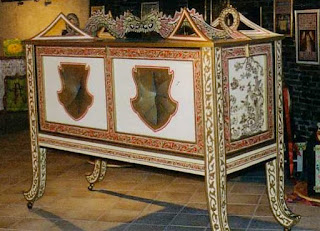 That my friends will do it for Part 1 of the Illusions of Chevalier Ernest Thorn. I would encourage you to listen to the podcast on him. I shall continue to dig further into his life and his many forgotten illusions and hopefully bring them to light. I have a lead on several as I type this but they are not quite 'in focus' yet. Until next time...