Notes on Episode 11 The Great Maro 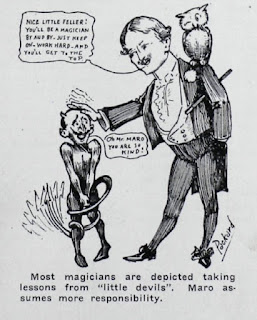 Here is the cartoon that appeared in the Sphinx Magazine on Maro. I believe the reason he left the 'devilish imps' off his posters was due to his Christian faith. Maro was no evangelist, nor did he include Christian references in his show, but like many people of the time, he was being respectful of his faith by leaving off that particular imagery.

If you look closer at this particular poster, you'll see in place of the 'imps' Maro has garden gnomes.

If you're curious about the Houdini-Maro Illusion I mentioned during the podcast, you can read about it and see the picture here.

In regards to the Astarte Levitation. Below is the video of Doug Henning presenting Astarte on one of his specials. It was an unusual and very different illusion when I saw Doug do it, but not particularly a big mystery. The version that was presented at the Los Angeles Conference on Magic History is a much longer piece and the costuming and choreography are much better. That version you can see if you are a Genii Magazine subscriber. It's in the January 2014 issue on page 72. It's called The Maid of the Moon, which is the name that Herrmann used when he presented the illusion.

And now you can listen to the entire Episode 11 below, IF you haven't already done so. And please remember to LIKE-SHARE-and Subscribe to the podcast, PLEASE :)