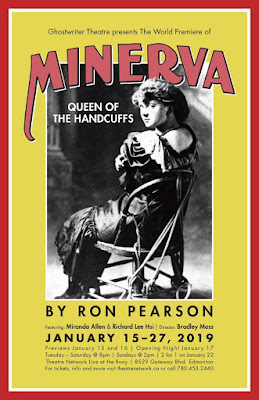 I first heard of this project from my friend Ron Pearson at a marketing conference we both attended in the fall of 2017. It sounded like a great idea, a play about Minerva, and I think it is! Rather than me talk about it, I'll let Ron tell you about it!

The inspiration for the play came from Jim Steinmeyer's book on Jarrett. Jarrett was married to Minerva and tells a harrowing story about her and Houdini. I don't want to give it away here as it is very important to the plot of the play, but if you have the book it's worth taking a look.

I very much liked the idea of portraying Houdini as the bad guy, as he is traditionally seen as the archetypal hero. It gave me the opportunity to cast him as the symbol for all of the barriers and inequality that women had to endure at the turn of the twentieth century, particularly female performers.

The play follows Minerva from the beginning of her career, learning the act from her first husband William Vano. I then touch upon certain real life career points, such as the development of her Water Barrel escape, her suing Merryland Amusement Park in Maryland for breech of contract and her European tour.

Being that there is limited information about Minerva's history, I have had to take some liberties here and there. For example, there were three events in her life that I have connected for the narrative of the play. One was her sudden and unexplained cancellation of two weeks of performances. Another was her visitations from a Hypnotist (who later became her second husband and manager). The third was her promotion of an anti-anxiety pill in a newspaper advertisement.

So, in the play Minerva has consulted a Hypnotist to help her overcome anxiety attacks that have made her cancel her performances. The play is then told through flashbacks that come out of her hypnotic trances. 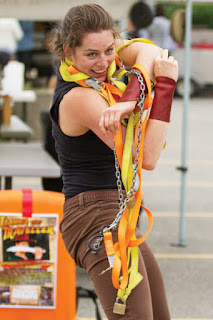 I am very fortunate that the lead actress in the play, Miranda Allen (yes, while I was writing the names Miranda and Minerva were continuously mixed up!). Miranda is a real life escape artist and street performer, as well as a trained actress. We had performed together at a number of Canadian festivals and she became the.catalyst for me to finally write this play that had been rattling around in my brain for many years. Her partner, Richard Lee Hsi, is also a trained actor and dancer and plays all of the male characters in the show, including Houdini.

I want to take this opportunity to thank Dean Carnegie and Gary Hunt, who were so kind and giving with their information on Minerva. I absolutely could not have written the play without their help. Thank you gentlemen!

I hope you will be able to see our show one day. My intention is to tour it, and I will certainly keep Dean in the loop as to where we will be performing. If you are in the Edmonton, Canada area January 15 to 27, please come see us! And please follow Minerva's future exploits on her facebook page at https://www.facebook.com/queenofhandcuffs/